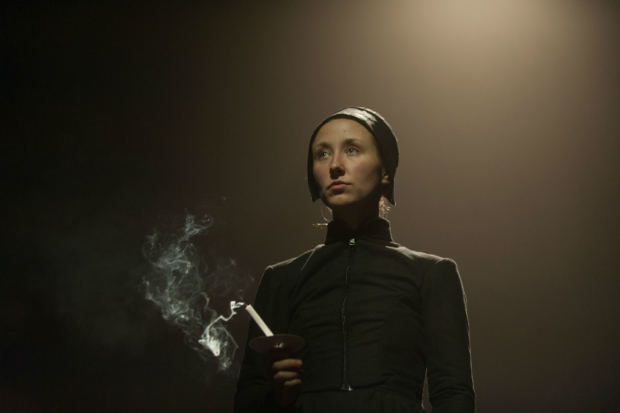 A six-hour play that could be told in half the time.

A well-performed narrative with a lessened appeal given the length. Six hours! Alan Ayckbourn’s eighty-somethingth play The Divide exemplifies society’s most sexist agendas in a bizarrely long production for the Edinburgh International Festival.

Set in a dystopian world where men and women are separated, The Divide follows two siblings Elihu (Jake Davies) and Soween (Erin Doherty) and the tragic Romeo and Juliet-esque love story after they fall in love with the same woman. The sexes are not allowed contact as females are infectious, each requiring to wear stocking-like face masks when in the presence of one another. Women are revered as disease-ridden and unequal to man. Children are born by insemination, and raised by two women – a mama and a mapa. If the child is a boy, he is sent to the other side when he comes of age. Same-sex relationships are the norm and heterosexuality is considered “unnatural”.

What is easily the most confusing aspect of this play is why on earth it needs to be six hours long. The Divide is told through university lectures 100 years after the separation ended, with diary entries, council minutes, emails and newspaper clippings piecing together the tale. While the performances are impeccable, the same story could be told in half the time with the same, if not greater, impact.

The Divide was originally conceived as prose with the intention of being published as a book; this might explain some of the lengthier monologues. It’s performed in two three hour sets. Annabel Bolton’s directing of this mammoth play is impressive, especially given Ayckbourn’s desire to “write something that the director in me would find undirectable”. Laura Hopkins’ simplistic yet highly effective stage design adds to the dark atmosphere, with a live choir behind the stage provides haunting notes.

The cast’s stamina ought to be applauded too. Doherty’s performance in particular is a stand-out. Playing the sister, she delicately demonstrates Soween’s innocence throughout the entire performance. Her pain cuts through the audience in each blow to the character – of which there are many. However much of the performance is diary-like monologues. They’re brilliant in delivery but often long and feel superfluous. It’s not surprising the audience gets fidgety. Still, Doherty powers through, making the audience care about this poor teenage girl who is only after someone to love. The performances from everyone are superb, an impressive feat given the endurance required. Props to casting director Jessica Ronane.

While there is much to be awed about the performance, what’s most aweing is its length. Six hours!