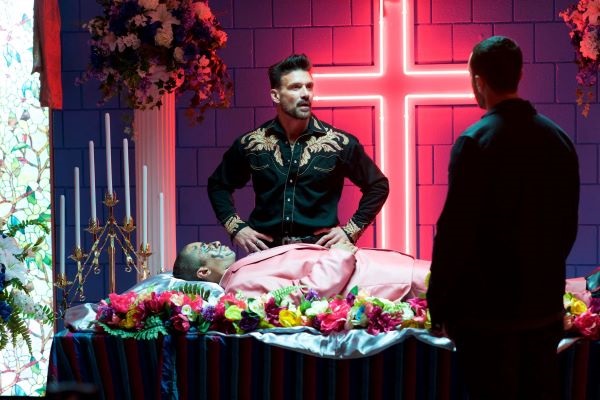 A spirited rare leading turn from character actor par excellence Shea Whigham is almost reason enough to check out this muddled mash of social drama and neo-noir crime thriller. The perennially reliable supporting player finds subtle depths and nuance in a rote rough diamond role as a hard-drinking and snorting social worker who inadvertently becomes embroiled in a dangerous situation involving one of his cases. However, Michele Civetta’s sophomore feature contorts itself in too many directions, none of which ultimately convince.

Tough social worker Parker (Whigham) has long had a protective eye on young Ashley (Taegan Burns) and her mother Dahlia (Olivia Munn) since her criminal husband Mike (Zach Avery) has been in jail. On his release Mike immediately goes back to his old ways, getting involved in a drugs heist that becomes a bloodbath. His return also puts Dahlia’s custody of Ashley in jeopardy, not least as he’s also his old violent, manipulative self to his family. When Parker’s attempts to keep Dahlia and Ashley safe within the social care system fails, he has to take matters into his own hands.

Aside from Whigham, Civetta has an impressive cast at his disposal, including Bruce Dern as Parker’s estranged jazz musician father, Taryn Manning as a flirty barfly who takes a shine to our rugged antihero, and Frank Grillo as the big fish in a small pond gangster who hauls Mike all-too easily back into the criminal fold. The film has such a barrelling, propulsive energy that it papers over the many cracks in structure and execution, not least that many of the assembled big-hitters amount to little more than showy cameos. The quieter character moments are the most successful, particularly between Whigham and Dern as an old man trying to blast out his past failings through the valves of his trumpet.

The biggest issue with The Gateway is undoubtedly structural. There is no sense of any real examination of the very real social issues Parker has to navigate. Much could be made of his continual abuse of the substances that have caused undoubted harm to so many of his charges. Instead, it all feels like a swift shorthand for his authenticity as a vigilante. As such, the facade of earnest drama rings hollow. This leaves a slightly garish bare bones thriller with the marrow stripped away by its half-hearted thematic concerns. The nicely-staged heist aside, there is little to get the pulse racing and it soon lapses into standard queasy trope of redemption through violence.