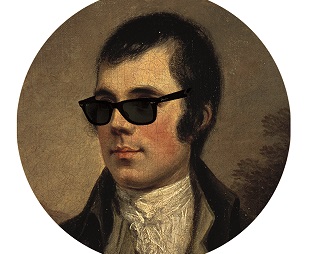 The Ghosting of Rabbie Burns

Storm Ciara may be raging outside, but Highlanders are hardy. The Onetouch Theatre in Eden Court is nearly full for tonight’s showing of The Ghosting of Robert Burns, written and produced by Gillian Duffy. Pared-back vocals of Burns songs mingle with chatter and greetings as the audience take their seats. The stage, meanwhile, is lit in a blue wash and sparse, with a single round table and two tartan-draped chairs.

A radio on a side table sets the scene: It is Burns Night 2020. Ceilidh music and an authentic voiceover lend authenticity – we find ourselves firmly in the 21st century. A projection of an old cottage completes our orientation as the first entrance introduces Emily, a struggling writer seeking solace in the isolation of her aunt’s cottage, played by Alyson Orr. On the radio, ‘Charlie is my Darling’ acts as a catalyst for her grief – traumatised by a recent break-up, she is here to forget and to write.

Hoof beat sound effects herald the arrival of the one and only Robert Burns, acted by John Kielty. It turns out that this holiday home was once his cottage, and Burns declares that his ghost is permitted to roam free one night a year ‘for good behaviour’. It is during his entrance that the play is at its entertaining best, particularly when he introduces himself as the ‘author of countless hits such as ‘Auld Lang Syne”. Burns’ ghost is a curious mix of 18th-century mannerisms and anachronisms, while also surprising by referring critically to his Wikipedia entry declaring it ‘fake news’. Nevertheless, he has never heard of Tinder.

Perhaps predictably, the characters’ on-stage relationship is dominated by the poet’s relentless (and thankfully unsuccessful) attempts to seduce Emily, in keeping with what we know of the philandering historical Burns. However, the show’s humour relies very heavily on sexual innuendo. The script consists of verbal sparring and philosophical banter about love, but relatively little actually happens in the way of movement, apart from Robert Burns roaming the aisles in an attempt to make his advances to the local ladies, which stirs a little unease.

Thankfully The Ghosting of Robert Burns also delivers many well-loved Burns songs, performed with beautiful harmonies which linger in the mind long after they end. And there are some moments of genuine rapturous laughter – a joke about Scottish men and their reluctance to speak of love for example, or Burns checking his breath when rebuffed by Emily, and his insecurity in the face of this unexpected rejection, asking the audience in a bid for reassurance: ‘I’ve still got it right? Tell me I’ve still got it!’

The bottom line is this: the concept for the play is truly original. An encounter with a ghostly Robert Burns, half acquainted with contemporary culture while also remaining firmly rooted in the 1790s. If you love Scotland’s Bard, and if you like your banter bawdy (as I’m sure Burns himself would have done), this show may just be for you.