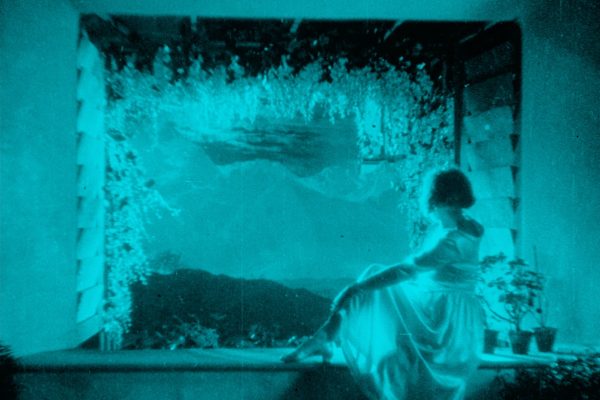 Striking silent film that launched the career of Leni Riefenstahl

German cinema of the 1920’s is famously associated with the iconic expressionist filmmakers; the awesome sets of Fritz Lang’s Metropolis, the shadowy angst of F.W. Murnau’s Nosferatu. Lesser known is the work of Dr Arnold Fanck PhD; geologist, director and father of the ‘mountain film’. Far away from the Berlin studios, Fanck had film crews perched on hills to shoot actors ski-jumping, dodging avalanches and dangling from clifftops. The striking imagery he captured for The Holy Mountain, distinctively tinted in blue and amber hues, conveys Fanck’s evident obsessions: the hypnotic beauty of alpine landscapes, the thrill of daredevil winter sports and the haunting beauty of a torch-lit search party at night.

But the film is noteworthy for another reason entirely: it launched the controversial career of Leni Riefenstahl, aka ‘Hitler’s favourite filmmaker’. This dark historical context, alongside the inclusion of Ray Mueller’s 1993 documentary ‘The Wonderful, Horrible Life of Leni Riefenstahl’, elevates this Masters of Cinema release from Eureka Entertainment into an intriguing document of 20th century cultural history.

It was Riefenstahl’s performance as a free-spirited dancer at the centre of a love-triangle between two intrepid mountaineers that brought her to Hitler’s attention. Riefenstahl is certainly a striking presence, dancing with abandon in front of the camera. Behind the scenes, though, she was learning the power of mythic filmmaking from the bold and adventurous Fanck. She went on to a direct her own films and, a decade or so later, Hitler famously enlisted Riefenstahl’s skills to helm the spectacular but morally deplorable Nazi propaganda film Triumph of the Will.

The Ray Muller documentary included on this disc takes a deep dive into Riefenstahl’s world, in all its complexities. Beginning as a conventional account of the controversial filmmaker’s life, it soon becomes evident that Riefenstahl has her own ideas. Looking impossibly sprightly for an 89 year-old, she’s a fascinating character, railing against Muller’s directorial decisions and not willing to conform to his ideas. Alongside the youthful, pre-Nazi era Riefentstahl of The Holy Mountain, the documentary makes for a fine pairing, as the elderly filmmaker reflects on her long life and her significant accomplishments, all of which are forever poisoned by her toxic association with Hitler and the Nazis.