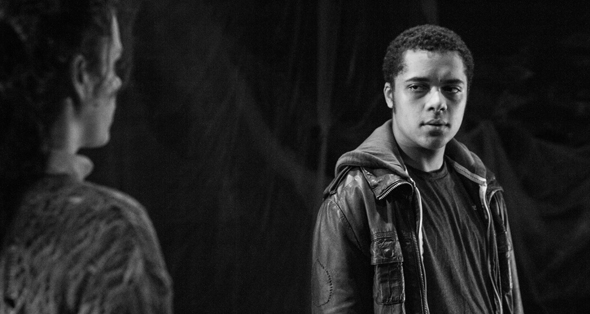 A brief glimpse at Twitter will tell you that fears of an impending apocalypse are not uncommon nowadays. With each major political shift, nuclear weapon tested, or global temperature increase, young people declare an increasingly bleak outlook on humanity’s future. Platform Young Company Ensemble has tapped into these fears in The Island, a post-apocalyptic story that explores the limits people are pushed to in a crisis.

The reasons for the end of the world are left ambiguous in Lewis Hetherington’s script, which gives the play a wide scope in political commentary. The company get to show the extreme results of all manner of contemporary crises – be it warfare, climate change, or even genetic mutation. At times The Island feels a little too full of topics – it seems to end very suddenly without wrapping up its ideas – but it does make for an entertaining tribute to our favourite dystopias.

The tech really adds to the piece. Blinding white lights, strange banging noises, and atmospheric bass sync into a well-crafted simulation of the unnerving new world. It is clear that all our fears of a barren and uninhabitable landscape have come true, which the minimalist set adds to. It is great to see plastic sheeting typical of construction sites hanging around the stage – another staple of apocalyptic films.

The action onstage could perhaps use some more variation. The tense conversations and shouting begin to get a little repetitive towards the end, although individually each actor shows a well-honed character with carefully thought out out traits.

Holly Downes especially is exceptional. She is a naturalistic actor who captures the rise and fall of her character with great skill. She stands out as a stoic calm amidst panic at the start, and later moves the audience when she depicts a resigned and defeated individual overthrown by the group. Marissa Bonnar is another joy to watch. She is a born storyteller, capitalising on the humour of a Noah’s Arc/Harry Potter hybrid whilst also making it a genuinely hopeful and touching narrative.

The Island will tick all the boxes for fans of post-apocalyptic stories, despite not really treading new ground. Most of all the chemistry onstage is what makes the production. Platform’s youth ensemble have done well to tease out how relationships might be made and broken by extreme circumstances.