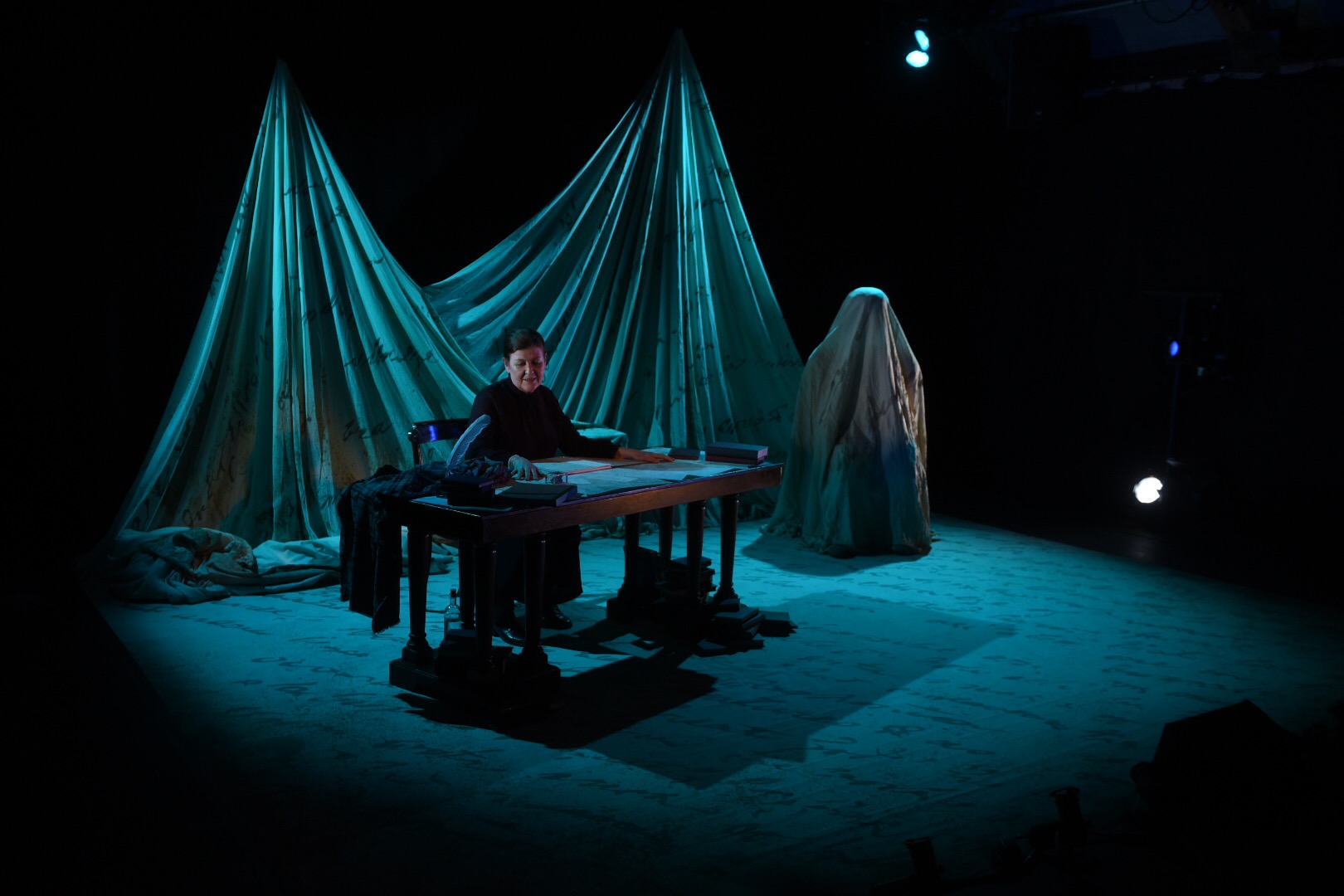 Fascinating and hilarious contemporary look back at Mary Shelley's creation of Frankenstein.

“You were the light relief,” Mary Shelley tells her monster, whom she created to keep the real nightmares at bay. On the 200th anniversary of the publication of Shelley’s novel Frankenstein, The Occasion looks back at the life of the author, in particular at the circumstances surrounding the creation of what is arguably the first science fiction novel.

The Monster and Mary Shelley, by Stewart Ennis, directed by Peter Clerke, has Shelley reflecting on the past from the present, bringing to life the events leading to the conception of Frankenstein, including how she ran away with married poet Percy Bysshe Shelley, and the ghost story writing competition proposed by Lord Byron.

The set design, by Ali Maclaurin, turns the stage into a manuscript, everything draped in white, handwriting covered sheets, creating a space of fictionality in which Shelley can still be alive in the present. The titular monster, i.e. Frankenstein’s Creature, is always present, an unnaturally large human figure seated to one side, his presence haunting all aspects of Shelley’s life on stage.

The monster wants to know how and why he was created. Like many, then and now, he seems to have difficulty believing a teenage girl could have the literary genius to write such a complex, enduring novel, and seeks some alternative explanation – was it perhaps because she was suffering from postnatal depression or some other mental illness? Or, as Mary says, “maybe I was just a fucking genius!”

Catherine Gillard is utterly entrancing as Mary Shelley, keeping the audience riveted as she recounts and reenacts episodes of Shelley’s life. She perfectly draws out the comedic moments, such as her rendition of Presumption, the unauthorised 1822 stage adaptation of Frankenstein, and the reenactment of her first sexual encounter with Percy Bysshe Shelley, which is all the more hilarious for being told in the language of a contemporary teenager. The more tragic parts of her life, the deaths of most of her young children and her husband, are related expressively; while the telling of the story of George Forster, an early subject of experiments in reanimating corpses using electricity, is downright chilling.

Of course, one cannot have Frankenstein without lightning – although these lightning flashes tend to occur after their accompanying thunder begins, a scientific impossibility that becomes rather distracting, raising questions about whether the relative speeds of light and sound are radically different in the world of the play for any particular reason.

The Monster & Mary Shelley is a wonderfully engaging show about a fascinating historical author, who lived a rather unconventional life for her time. The subject matter may be 200 years old, but The Occasion are successful in giving it a contemporary and relevant spin, particularly in highlighting the sexism Shelley faced both in her lifetime and by modern critics of her work.