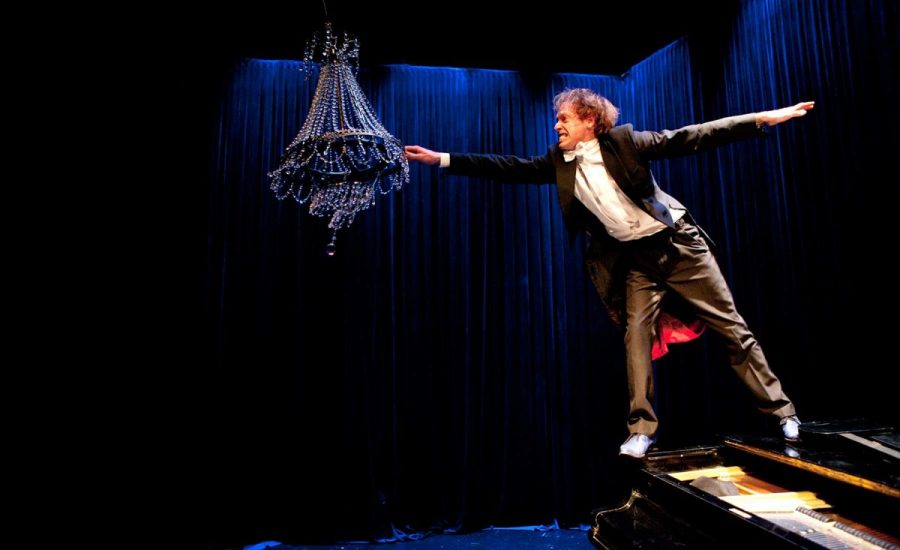 A gorgeous setting and lovingly executed, this is a show slightly limited by its own premise.

The slapstick is beautifully done

There’s a real life account in the 1979 publication The Book of Heroic Failures where a pianist tries and fails to give a concert to a waiting audience, before eventually taking his frustrations out on the hapless instrument. The Pianist gives an idea, through the medium of classic silent movie clowning and impressive acrobatics, of how this might have played out – though, perhaps thankfully, without an axe to finish things off.

The setting is beautiful, and classic: heavy purple drapes, a lone grand piano and a single chandelier, in the vaulted halls of the Assembly Roxy. Thomas Monckton, the apparent virtuoso, is in no need of an overly cluttered stage. He makes incredibly use of his strikingly tall physique instead, bending, contorting, turning joints almost 360 degrees and swinging from the ceiling when it all gets too much. There’s great use of the audience as well (literally – Monckton balances on the heads of two people in order to get on and off the stage more than once.)

The slight disappointment, however, is that however skilfully the joke is told, it is essentially the same one for an hour. The slapstick is beautifully done, and the piano is an engaging prop/character in its own right – but after a while, you begin to long for the obvious rather than comedic solution to be sought, and for even one note to sound. The payoff does come eventually, though not quite as impressively as it could have done.

The best moments, ironically given that the piano is singularly uncooperative for most of the hour, do feature music. Several short escapes from the narrative are dotted through the performance, like elegant short films, with an off-stage soundtrack. In one, Monckton simulates a confrontation underneath a dust sheet between his own knees, with great use of comedy thwacks and punches. In another, the spotlight lingers on the piano stool as, using only his hands, he imagines the life cycle of two lovers, from first meeting to mutual demise. It’s child-like, haunting and extremely moving.