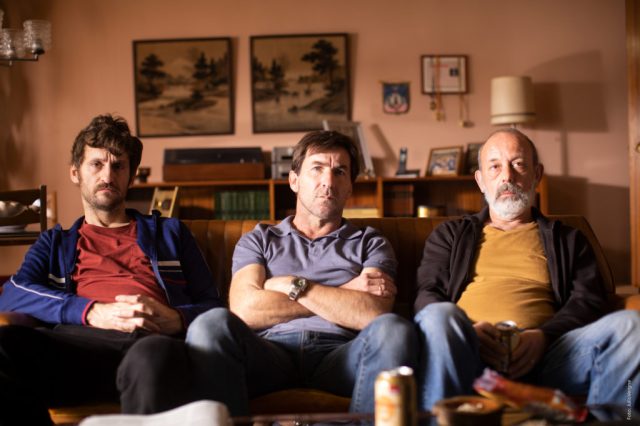 Three unemployed friends – Paco (Antonio de la Torre), Andrade (Raul Arevalo) and Ramon (Chema del Barco) – meet at Paco’s flat to carry out a plan of revenge against their former employer. However, as complications arise, the three men are stuck in the flat, and discussions between them result in revelations about each of them that affect their relationships with one another.

Based on the play by Ignasi Vidal, who also co-wrote the screenplay with director Menarguez, the script manages to effectively flesh out its three main characters equally, with Paco’s anger at the humiliations he faced at work and later the revelation of his wife’s affair sharing equal space with Andrade’s worries over reconnecting with his estranged mother and Ramon’s lower-key concerns regarding his family. Ramon’s real issues are effectively kept under wraps for the duration of the film, with little foreshadowing until the reveal, which makes it all the more powerful upon its arrival. The final twist further underlines Ramon’s importance to the narrative in a way that is only obvious upon further rewatches – a clever move by Menarguez and Vidal.

The three main performances also help to establish the characters and their relationships, with de la Torre providing appointed leader Paco with a pugnacious sense of outrage that repeatedly spills over, whether it be his dedication to the plan or when lashing out at the man who is having an affair with his wife. In addition, Arevalo captures Andrade’s nervousness and uncertainty about his relationship with his mother and, crucially, del Barco adeptly underplays Ramon’s personality in order to make his climactic revelation about his family have a greater impact, only hinting at his instability through a brief conversation with Andrade towards the end.

However, Menarguez and Vidal’s screenplay does betray the film’s stage-bound origins, with an over-reliance on dialogue that results in a lack of visual flair (no flashbacks to either of the three men’s lives outside of their meeting) that isn’t helped by all of the verbal action taking place in mostly one location (Paco’s flat). Whilst the dialogue is mostly strong enough to withstand this absence, there are moments where the lack of physical/visual action slows the pace. As a result, the decision to keep the running time relatively short was a good one, as it’s difficult to imagine the film lasting beyond 90 minutes.

The Plan is a tightly-written three-hander that overcomes the stylistic limitations of its onstage origins to provide an effective showcase for its three main actors and an intriguing journey for audiences.