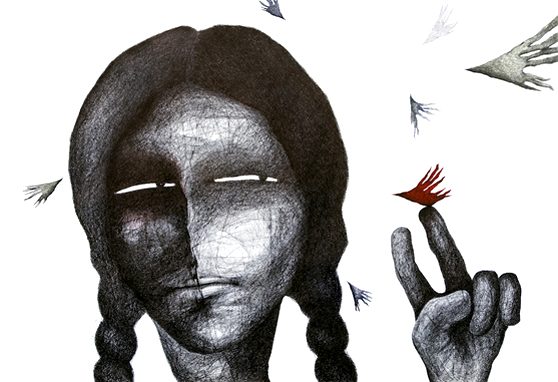 The Sky Is Safe

Matthew Zajac is a man with a heart, an ear for a story and a fierce sense of justice. His previous show, The Tailor of Inverness, was a stunning example of storytelling based on real life. And his new show is no different.

The Sky Is Safe introduces us to Gordon from Scotland and Amal from Syria. They meet in Taksim, the commercial centre of Istanbul. He’s working there. She lives nearby, having fled her homeland when living there became too difficult. She’s a law graduate. He works in an industry he’d rather not talk about. They swap stories, truths and half-truths until the truth explodes their relationship just as effectively as the bombs dropped on Aleppo.

The central story is interwoven with the stories of other women trying to grip onto something like normality in an increasingly difficult and dangerous political climate. Gordon’s apparently suburban Western existence is a stark contrast to their stories of arrests, snipers and interminable checkpoints as they try to escape their country’s borders.

Both actors in Dogstar’s new production are superb, switching effortlessly between a myriad of characters. Dana Hajaj’s multiple women are presented with grace, compassion and perfectly pitched emotion. Zajac’s Gordon is an amiable gentleman who keeps us guessing – but switches in a heartbeat to Syrian soldier with equal conviction.

Directed by Ben Harrison, this is a pacey, polished and visually rich production. The set is minimal but well-used and enhanced beautifully by set designer Nihad Al Turk, a Syrian visual artist who moved to Scotland with his family from a refugee camp in Lebanon.

But the heartbreaking treat here is the stories. Zajac says that the script is based on interviews with female refugees conducted earlier this year in Istanbul. So whilst this isn’t testimonial theatre as such, these stories add up to a compelling depiction of stories rarely told: those of displaced women trying to triumph over their circumstances.

“Tomorrow will be better than today”, says one woman. As the refugee crisis continues to unfurl across Europe, we can only hope that she’s right.