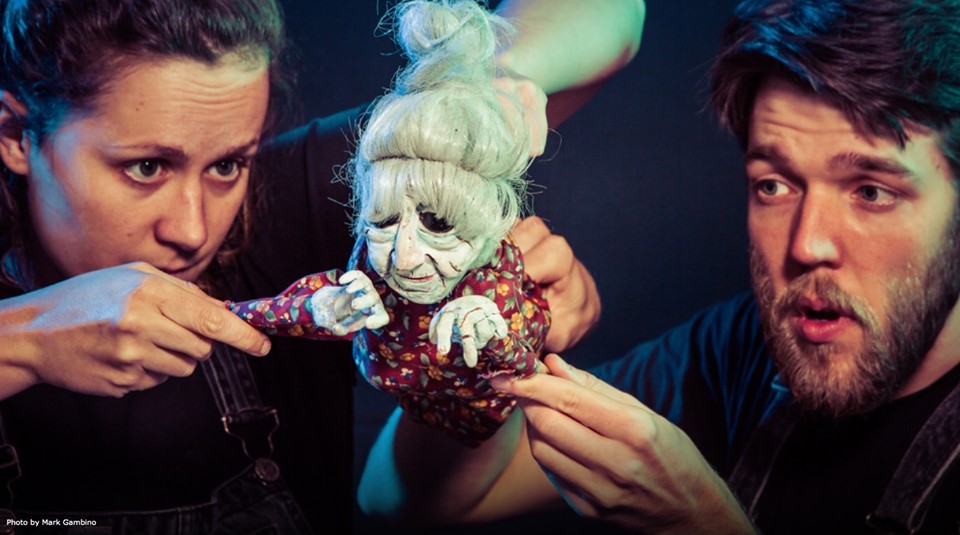 The Three Deaths of Ebony Black

Two performers wrangle a cast of puppets in this fun and irreverent look at death, families and what happens when they come together. Opening in a nursing home, we see Ebony Black sit on her bed and think back over her life: the flowers, the dancing and the love, before she breathes her last. It was a life well lived, but will her death go as smoothly?

They say a person dies three deaths, the first when they die, the second when their body is buried and the third when someone speaks their name for the final time before they are forgotten. At the funeral, the second death, we meet the family – her twin sister Ivory, her niece, nephew and great-niece, as well as her nurse and the funeral directors. The plan is for her to be buried and then the will to be read but, as they say, the best laid plans of mice and puppets…

From the start The Three Deaths of Ebony Black has the audience giggling and as it becomes clear that everyone at the funeral has their own nefarious plans the farce begins. Each character has their own individual personality and their own development over the course of the piece. From the somewhat incestuous ‘Real Estate Twins’ betting briefcases of money on the outcome of the will to the soon-to-be-retired funeral director hoping for a simple last day, each has their plans foiled in a somewhat predictable but nevertheless very amusing manner. With plenty of one-liners, including the excellent exclamation: “I hate it when children are having an existential crisis!” The songs are quite catchy, especially the comedy funeral director song and the clubbing scene, however the music was often loud compared to the voices making it difficult to hear parts.

Playing up the medium of puppets Amberley Cull and Nick Pages-Oliver joke about Ebony and Ivory being identical twins (or rather being the same puppet) and get gradually more and more hilariously ridiculous in their efforts to operate all the puppets at the same time. Yet they manage to get great expressions from the puppets unmoving faces. The duo’s easy-going nature and comic timing are well used especially at impromptu moments when technical difficulties occurred.

This fun farce takes a good look at life and death in all its ridiculousness, making excellent use of the medium of puppetry, and all that allows, for this piece is well written and well performed.