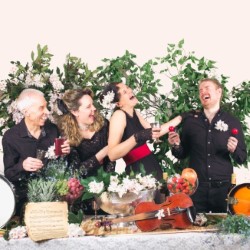 A brilliant show about the forgotten deserves to be remembered.

Entering a room draped in black and complete with tasteful flower decorations, the audience is handed an order of service. This looks and feels like a funeral, or at the very least a memorial. The Unsung celebrates the stories of eight different musical people or groups who have recently died, yet remain relatively obscure. Most of them you’ll have never heard of and this is actually what makes The Unsung so special, so poignant and so thought-provoking. Why do we, or should we, eulogise the likes of Amy Winehouse, Kurt Cobain or Jim Morrison? In death, we are all equal.

Take our first “life” – Sandor Feher (1973-2012) , a Hungarian violinist (and probably an exceptional one), caught up in the Costa Concordia disaster. The three piece band play an original composition, whilst the show’s creator, award winning poet Genevieve Carver, talks rhythmically over the music in a composition entitled Air On A Heart String. The spoken word over music takes a little getting used to, but does allow the audience to absorb more detail about the various stories than would have been conveyed in song. Carver has a distinctive and quite rhythmic delivery which fits well with the music.

The Eagles of Death “hymn'”was written to commemorate the 89 victims of the Bataclan tragedy. Following some almost Klezmer style music, the band demonstrate their versatility with a more heavy metal flavour, as Carver uses the symbolism of eagles circling over Paris as she seeks to humanise some of the victims, imparting well researched and little known facts about their personal lives.

A composition called The Unsung introduces yet another genre and a more African flavour to the proceedings, as the victims of the live music ban in Mali are remembered with a much more upbeat composition. Brian Bestall on the drums is impressive throughout but comes into his own here with his African drumming.

The variety of the stories and the music makes for a very interesting show which doesn’t feel macabre despite the subject matter. The poetry is well written and the band talented. However, it’s the idea behind The Unsung which is so brilliant, verging on genius.