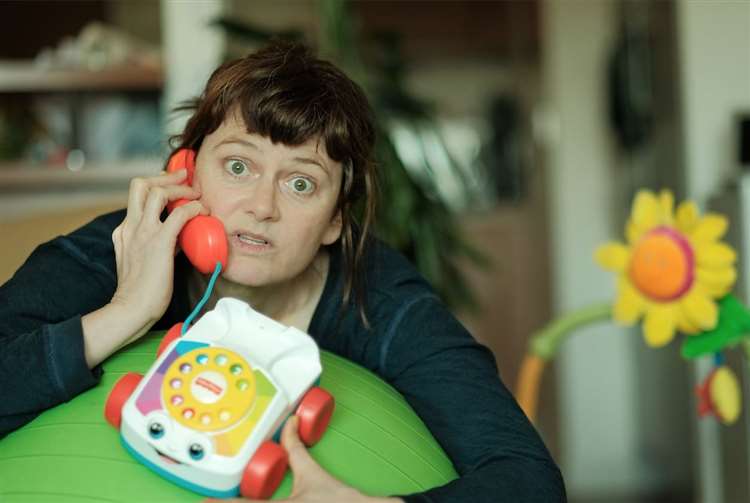 Though This Be Madness

Part of the Scottish Mental Health Arts Festival, and BSL-signed throughout, Skye Loneragan’s one-woman show Though This Be Madness guides the audience across the no man’s land between sanity and madness. With its sometimes-eccentric mix of speech, movement, sound and music, as well as a largely stream-of-consciousness monologue structure, the show allows for some fascinating explorations and insights into mental health struggles.

Loneragan’s performance persona is a likeable woman negotiating the cluttered landscape of her life as a mature new mother. Episodes are announced by intriguing electronic post-it notes – ‘Fish Hook’, ‘Little Comet’, ‘Activated Macadamias’ etc which provide prompts and signposts for our engaging, and challenging journey. The sometimes-fluent, sometimes hesitant, narrative captures perfectly the unhinging, disorienting time when sleep eludes you as a parent, and you are, as the speaker suggests, ‘held hostage by the baby monitor.’

The chaotic set is littered with not only the baby’s cot (containing a supposedly slumbering infant), but also a plethora of toys. The turmoil of motherhood is on full display, as are its inevitable constraints which prove overarching. The monologue’s form shifts constantly in arcs and loops reflecting this, with its fractures and tangents evoking the ever-changing terrain.

A restless Loneragan speaks to our hearts and minds – explaining, imploring, and bantering. Sometimes she is on a huge Pilates ball, sometimes up a ladder, but the through-line remains. The monologue is a constant search for clarity through the fog, a desperate clutching at normality in the face of the lurking spectre of madness with the narrative navigating not just the speaker’s own intense mental health difficulties but also those of her father, her sisters – Ophelia, Juliet, and Rosalind.

In this turbulent context, music provides a rich balm. Mairi Campbell’s gentle pieces, as well as the use of Vaughan Williams’ “The Lark Ascending”, with its perpetual yearning for freedom, are beautiful and compliment the show wonderfully.

While the evening is laced with ‘true bits’, there are plenty of beautifully-written stories. These recount the constant struggle to find calm, truth, humanity, and serenity, despite what life throws at us. And this quest is what makes the show ultimately positive, even inspiring.

The expansive and allusive, Though This Be Madness, is rich with metaphors to evoke the lived experience of mental illness, and the overall show proves to be a bold, raw drama. Moreover, the post-show discussion hosted by producer Kate Taylor proves equally insightful, and this alone is evidence of the resonance, connection and value that we all share despite our individual struggles.