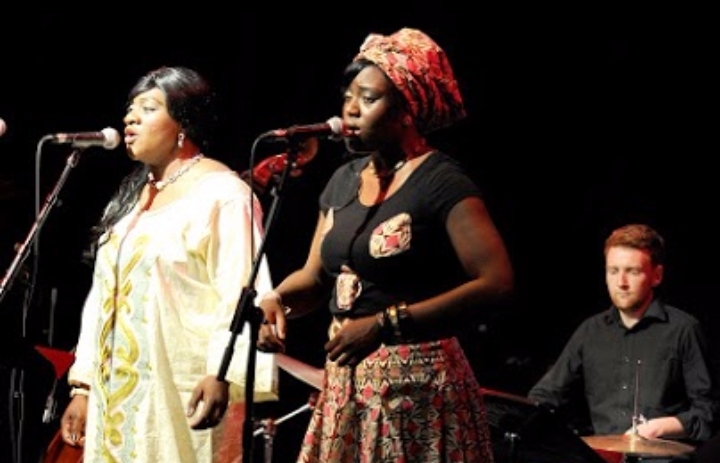 "unique ensemble of musicians", "celebrate diversity and power of music", "inspirational language that can touch everyone"

The Manchester International Roots Orchestra, MIRO, is a unique ensemble of musicians with roots from across the world. In St John’s Church at the Just Festival, they demonstrate how music can overcome national borders and become an inspirational language that can touch everyone.

The orchestra’s repertoire exposes the diversity of great talents among its members. MIRO is composed of refugees, students from the Royal Northern College of Music, and local and international musicians from many traditions, lead by Michael Cretu, double bassist and composer.

Cretu comes from a long family tradition of Romani musicians and his playing is strongly influenced by Romani folk music. This is just one part in the rich and delicate embroidery that includes soft middle eastern melodies, traditional West African themes, the powerful rap of My Name Is B (MNIB) and Remi and the profound voices of the other singers. This is enhanced by a diverse range of instruments including, among others, a Kora, a traditional 21 string west african instrument, and a santour, a hammered dulcimer of Iranian origin.

The topics of the songs are linked to the idea of the necessity of change, reflecting on the past to elaborate and make something good for the present. One traditional African song, enriched with a delicate chant and Kora’s strings over a texture of double bass and percussion, is focused on the importance of sharing money between those who are wealthy and those who are not. In an embracing middle eastern melody, another song is a chant for the freedom of the Kurdish people. Then Sarah Yaseen, in her last performance with the orchestra, gives a touching interpretation of a 15th century piece accompanied by the piano.

And the performance continues with this atmospheric mixture of sounds for one hour of traditional and new compositions that celebrates diversity and, as the lyrics of another African songs say, the power of music that is a gift to share among human beings. And it ends with an original composition Time for Change, written by MNIB, in a captivating crescendo that brings all the members to the stage and sings about the importance of recognising the real needs in our lives.

The atmospheric mixture of melodies, instruments and personalities makes the performance something unique, in a truly orginal celebration of diversity and music.