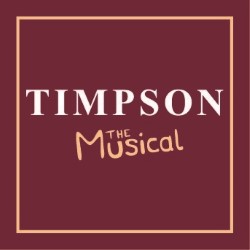 In 1865, William Timpson and Walter Joyce opened up Timpson, the future national go-to for shoe repairs and key-cutting… but let’s forget about all that. Gigglemug Theatre’s Timpson: The Musical, sponsored by the company themselves, offers an alternative origin story, one involving forbidden love, two warring families, and some lousy inventions.

Parodying Romeo and Juliet runs the risk of being too smug or knowing, but this musical based on the fictional creation of a shoe repair shop knows exactly what it is. The families are called “Keypulet” and “Montashoe”. The children of each household are called “Keeleigh” (Sabrina Messer) and “Monty” (Rob Madge). The wordplay, slapstick, and general silliness can be quite hilarious. Sometimes it is taken a little far, with what seemed like a throwaway joke about the Keypulets being in the business of “tiny saws” turning out to be a major plot point. Even so, the show’s strength is in its one-liners, which are consistently funny.

The songs themselves vary in quality. Hole in my Sole isn’t that catchy, but It’s a Tingle is awkwardly hilarious. Others, such as Gotta Get Up When They Knock You Down are jolly and entertaining, even if they do feel like filler and an excuse to slap each other round the face. You’re unlikely to be singing any on your journey home, but they’re perfectly enjoyable.

The songs are brought to life by the exuberant performances from the cast. Playing a happy-go-lucky inventor with an irrepressible but impractical imagination, Madge’s dynamic movement and comic timing make him difficult to look away from (his introduction of the “People-flap! A cat-flap for people!” featuring him dropping into the splits is testament to that). Messer exudes a Miranda Hart-esque quirkiness that makes her instantly endearing, though she seems to struggle with the high notes at times. Matt Bond’s performance as Master Keypulet, however, may divide audiences on whether his booming voice and one-note style has a Brian Blessed touch to it, or if it’s just loud and grating.

The plot points of the musical and where they line up with those of the source material are not always clear, dipping in and out from parodying the classic tragedy, parodying musicals in general, and following its own invented storyline. By the end, though, it doesn’t matter in the slightest. Light-hearted and sublimely cheesy, Timpson: The Musical is a fun time for nearly anyone.