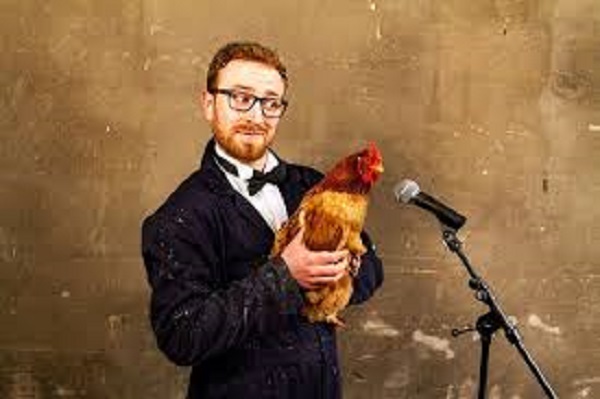 Tom Kitching
Welcome To My Barn!

Cumbrian comedian introduces us to his barmy farm with charm

If you’re curious to find out what life in the country is really like, take a trip down to Farmer Tom Kitching’s fantastical ranch, where the grass is greener on the other side – just don’t tell the sheep that. “Welcome To My Barn!” Kitching bellows, opening up the big red doors to invite city slickers for a tour of his funny farm.

As the son of a shepherd who has inherited the family homestead, Kitching lures us in with a cool aura not often associated with farmers. He’s great at flamboyantly chewing the scenery with the slick style of a 1950’s teddy boy. It’s almost like what somebody from deep in the sticks thinks is cool, but because their exposure to pop culture is so limited they put on an imitation of Elvis Presley.

The style of Kitching’s humor is fairly off-the-barn-wall, with a rigorous alternative streak running through the show, offset with a self-aware batch of bad agriculture puns. When he lands a pirouette at the end of a cheesy joke you forgive him instantly, because to be fair – he consumes an ungodly amount of cheese thanks to his dairy fleet. There’s something charming about him that’s quite difficult to put your finger on, it makes you keep laughing even when he’s trying to build the next set-up. A little bit of natural charisma and the breaks in his character puts you in his corner while he’s trying to introduce us to his esoteric stable of rebellious sheep and suicidal turkeys.

Diving into the lives of his livestock he puts on a one man play encased in itself, wearing the mask of his friends and broadcasting their thoughts and feelings in weighty existentialist monologues. These soon devolve into Flight of The Conchords–esque songs about the green grass of home, catchy little beats that feel like they’ve been squeezed out of a forgotten Casio keyboard. Whenever a sad ballad from a Babe–like sheep-calf brings the mood down, he changes course and plays a message from his questionably legal sponsor, Fred’s Fish Market.

It’s the little half laughs that he does, giggling at the absurdity of his little world which makes him very affable as a performer. As a stand-up dabbling with a variety of ways to present material, Kitching has a goofy and laid-back energy similar to the kings of weird comedy, Vic Reeves and Bob Mortimer. While he doesn’t quite reach the heights of eccentricity that they established, he definitely has achieved something special with this barnyard saga.