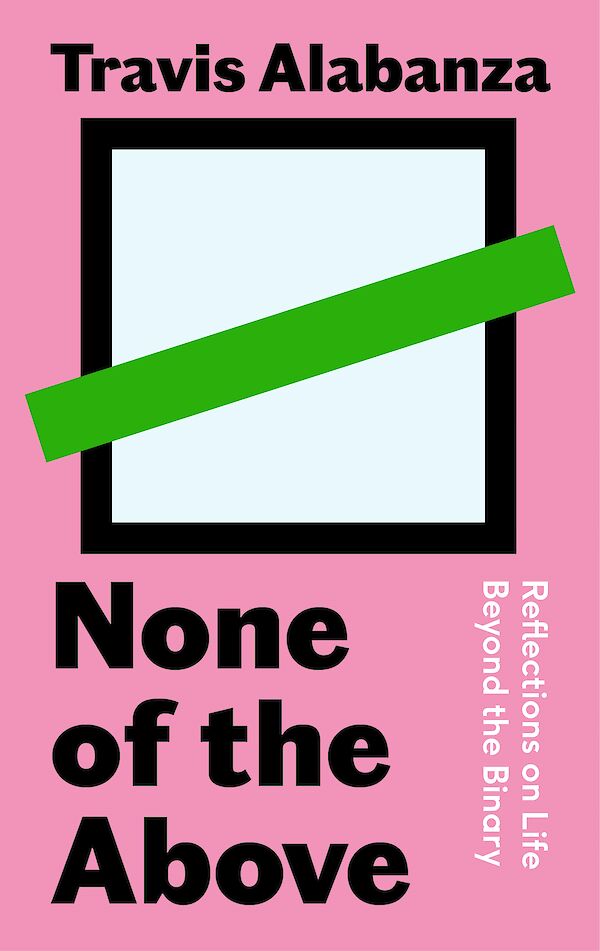 Travis Alabanza
None of the Above

Clunky memoir of growing up non-binary

Clunky memoir of growing up non-binary

Travis Alabanza frames their memoir of transness, None of the Above,  in the form of seven questions or phrases commonly heard by LGBT+ people. Phrases that are often seen as impolite and insensitive at best.

When asked by a wealthy donor at a charity event, ‘So, when did you know?’ (when did Alabanza first realise they were non-binary) Alabanza regales their interlocutor with a long story about their early childhood. Unlike their brother, Travis was a silent child whose mother finally went to the doctor, Alabanza mockingly recalled. During the consultation, the three-year-old Alabanza finally spoke with these words: ‘Doctor, I am actually a non-binary non-conforming deviant.’ It’s a witty icebreaker, to say the least.

Non-binary Alabanza is, ‘a trans person [who] in public does not look like a man or a woman.’ In the chapter on ‘proper trans,’ Alabanza questions a friend who suggested they ‘were not a traditional trans.’ For this, read not acceptable, skewed too close to one gender than another. This seems to be the rub of the non-binary world.

Many would argue that it’s more honest for a ‘biological male’ to claim non-binary status (are all humans not on a male/female continuum to some extent?) than to claim to be a woman? And are most gender characteristics not social constructs anyway?

Alabanza in no way wants cisgender validation, although this does not always make things easy for the reader. Some of the language is as tortuous as the arguments. ‘As trans becomes more visible in mainstream society there is a specific attempt to make it less complex and more legible… part of this project of “legibility” by cisgender society is to delegitimise unrecognisable genders outside of the binary’.

It’s difficult to determine who the book is aimed at, trans/non-binary people struggling with their identity or the broader community struggling to appreciate current gender politics? In the past couple of years, the debates around the trans movement have become increasingly divisive and toxic and perhaps for ‘non-binaries’ – in a world that sees everything in male-female terms – their’s is the most challenging of options.

Alabanza is proud of their working-class, mixed-race roots growing up in a red brick council estate in Bristol. Their work surrounding gender, trans identity and race has gained international recognition, and they have given talks at universities in the UK and US. Alabanza trails a glittering array of awards and achievements as a writer, performer and theatre maker: the youngest recipient of the Artist-in-Residency programme at Tate Galleries; their debut show Burgerz toured internationally to sold-out performances from London to Sao Paulo, and won the Edinburgh Fringe Total Theatre Award; their writing has appeared in the Guardian, Vice and BBC Online; and there was even a fortnightly column in the Metro.

Alabanza is undoubtedly having a moment while still in their mid-twenties. Next January sees the premier of Travis Alabanza’s play Sound of the Underground at London’s prestigious Royal Court. So it’s all the more surprising that None of the Above is such a difficult read.