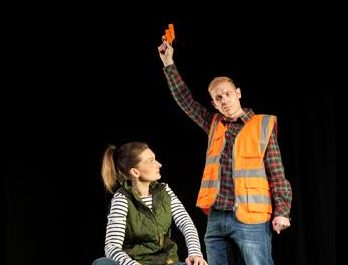 A candid exploration of the effects of disappointment and despair

One of two plays presented by Mull Theatre in their digital series: Emergence, Anita Vettesse’s Undocumented is a story written for and set in COVID-19 times. Despite being advertised as a “hopeful love story (of sorts)”, Vettesse’s play is instead a story of disappointment, despair, and looking for an escape.

Early one morning on one of the Scottish isles, a local man named Pete finds an unknown woman from the mainland coming ashore. Wanting to protect his island from outsiders potentially carrying the virus, Pete tries to make her go back to where she came from. Once they start talking, however, Pete realises the island’s new arrival, Jess, doesn’t plan on being around for too long.

Undocumented begins with the crystal-clear waters and white sands that make up the picturesque beaches found on the Scottish isles. While it’s understandable that Mull Theatre chose not to film the play there, the change of scenery to a stripped-back stage – comprising a black backdrop, a few boxes and a sand-covered floor – is a bit underwhelming. Still, the minimalist set means that all focus is on actors Simon Donaldson and Ashley Smith – the stars of Emergence‘s other play, Strange Rocks – and the story they’re here to tell.

While the play begins with a number of humorous (though dare I say clichéd) references to COVID-19 – with Donaldson equipped with disposable gloves and a pocket full of hand sanitiser – the story gradually moves away from the pandemic and focuses in on the characters’ own crises. As each character reveals more about themselves, they hope to find some comfort in one another. Unfortunately, most of these revelations don’t come until the second half of the play, and as a result Undocumented feels a little unbalanced. Without any comical relief, Jess’s revelations feel particularly heavy and wearisome. Her depressive state has a permeating effect, keeping hold of you long after the play has finished and even overshadowing the glimmer of hope the play’s final moments offer.

Still, though there are areas that can be improved, Undocumented‘s candid address of suicidal ideation comes at a time where many people are struggling with their mental health. Though it may not be the play you are expecting, it reminds us to look out for those around us and to offer a helping hand when they are in need.

Emergence (Strange Rocks and Undocumented) is available to watch here.