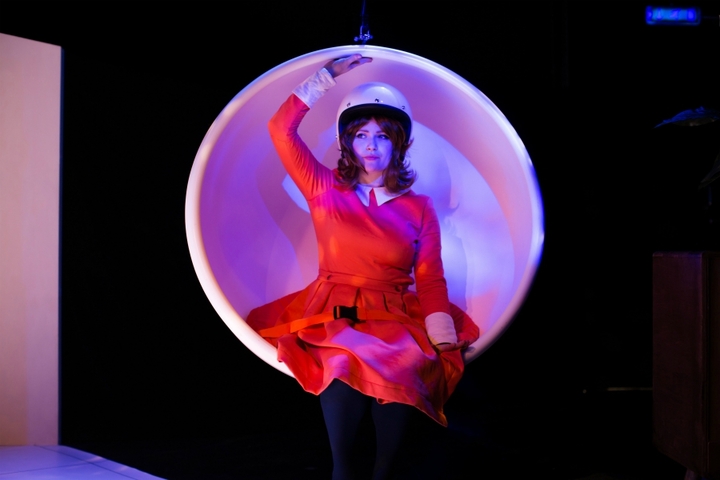 Frozen Charlotte present their delightful, funky little ode to the stars with Valentina’s Galaxy. With a retro, colourful gadget filled stage, a perky heroine and a funky soundtrack it has the aura of a children’s stage show version of Air’s classic chill out album, Moon Safari. The show follows Valentina, who having prepared her adorable little flat (insert cupcakes and peace lily’s) for a birthday party comes to realise that no one can make it along to her party. Just then an old friend begins to appear, an imaginary friend who encourages Valentina to follow her dreams to become an astronaut.

The show is aimed at age 2-6 but it has a universal theme of reaching for the stars, excuse the pun. It’s an upbeat 45 minutes filled with nice use of the stage design where secret little contraptions appear throughout, and a new prop comes into play. The company also have a nice use of media within the set design with Valentina’s window screen and television taking us beyond the little apartment we started off in. The two actresses are extremely likeable, give expressive and physically impressive performances, and have the children in the audience in the palm of their hands. It’s wonderful to see a children’s show about science and astronomy where the two leads are female.

Whilst the show perhaps misses out on some comedic opportunities with an imaginary friend character, the children in the audience were still beaming from ear to ear and were clearly engrossed in the entire production. Highlights come along as the opportunity to get hands on with some of the wonderful props comes along towards the finale. Any little youngster with an interest in science or space would benefit greatly from seeing this fun, very sweet production with plenty little snippets of interesting facts that they will carry away with them like a little space rock in their pocket.