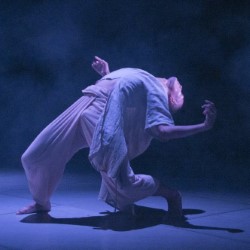 A melange of beautifully designed soundscapes and songs.

a melange of beautifully designed soundscapes and songs and chants

Varhung starts quietly with only a sliver of light picking out three forestry workers from Paiwan, as if observed through a crack in a door, as they prepare for work in their “block house”.  Gradually, the stage lights up as we follow the workers through a long and arduous day of labour. The music is a melange of beautifully designed soundscapes and songs and chants, until (exhausted and flagging) the labourers spend their evening drunk and singing.

But there is so much more to Varhung than this apparently simple story of modern day pastoral life.  So much, much more.  “Varhung” in Paiwan means “the heart” and from the first glimpse of the cast of two boys and one girl we are aware of something not being right in the heart department, an awkwardness, a sadness, a love triangle.  “Makudja,” they constantly chat.  “What happened?”

Choreographer, Baru Madiljin, skilfully and unstintingly moves his performers around the stage for a punishing fifty minutes in much the same manner that physical labourers are worked to the point of exhaustion –  and then driven some more.  They dance, chant and then even sing – beautifully – their movements following the rhythms of traditional work songs, their story of love and loss slowly unfolding as the long day drags to its conclusion in what can only be described as a total assault on the senses.

The songs are beautiful and haunting and the three dancers give a virtuoso performance in what may be one of the most unique physical and aural performances at the Fringe this year.