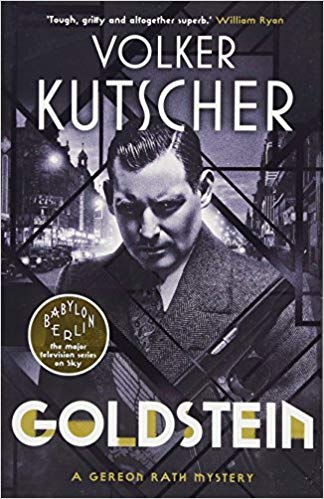 An absorbing mystery that gives insights into life in 1930s Berlin.

Rath, a homicide police detective inspector, has been transferred to Berlin. This is the Berlin of the 1930’s, a layered world where politics, crime and enormous social change coexist, overlap, and more and more frequently collide. The cover design (by Mark Swan) sets the brooding atmosphere for the story between the covers, through which Berlin’s vaguely sinister nightlife glitters. And the translation (by Niall Sellar) helps to make sense of contemporary Berlin for the contemporary reader.

Kutscher develops a mystery from numerous apparently unconnected strands. It is more a series of interlinking mysteries, characters and crimes. How they are linked is the journey and challenge for the reader, a route through which we are skilfully led. From the opening pages a crime committed in a department store by a young girl and boy and the consequences ensuing introduce us to some of the forces at work in Berlin.

Goldstein is an American Jewish hitman who has arrived in Berlin. The FBI have notified the Prussian police of his underworld connections and reputation. Rath has been assigned to the task of keeping him under observation and making him aware of the surveillance.

The characters who people Rath’s private world, from Charly, his on and off girlfriend, to friends and colleagues occupy both sides of the law, as does Rath himself. It becomes an increasingly tense and conflicted walk along a slippery path.

Kutscher is effective at describing the layout of Berlin in the 1930s and after a while you feel as though you are walking the streets, seeing the buildings, and hearing the voices yourself. You become aware of the physical and moral choices, the political and social changes challenging and confronting the characters as each strand is revealed.

Kutscher reveals the story and insights that we understand more readily with the help of history and hindsight. Gereon Rath is a touchstone for life as it was lived in this period. He exists as participant and observant recorder through this world but ultimately avoids answering the questions that are lining up outside his door. Even the resolution of the mystery is a surprise for Rath rather than a result of his pursuit and diligence. Goldstein is a good read but more of an experience of a slice of a tumultuous time than a mystery.