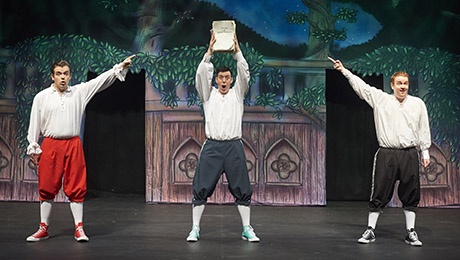 There is a theory that, given enough time on a typewriter, monkeys will eventually produce the complete works of Shakespeare. Instead, I like to think they will have written William Shakespeare’s Long Lost First Play (Abridged). The concept is simple: the Reduced Shakespeare Company have discovered the titular (if historically dubious) play and are duty bound to perform it on stage. Puck and Ariel duel in a world which is a giant mash-up of Shakespearean characters and scenarios, where Lady Macbeth dates Hamlet and Lear’s daughters are the three witches from Macbeth. All three of the latter are named after STDs. One sister is even a puppet who struts Emu-like on stage, neck extending and mouth snapping in a cod-Scottish accent. It’s a moment of genius. With such a rich body of work to draw on, Long Lost… is like the theatrical equivalent of a DJ mixtape beamed from a parallel universe.

But it’s an exceedingly clever, postmodern mix. Performed with gusto (the Converse trainers signal the energy, with everybody behaving like they are on speed), the puns come almost as thick and fast as the costume, accent and gender changes. More stand-up than theatre, the simple backdrop (knowingly referenced in the prologue) acts as a changing room while comedy noises Mickey Mouse the action. Even if you aren’t a Shakespeare aficionado the references to Harry Potter, Disney and Greggs will do the trick. And if not there’s always panto moments, fart jokes and archly awful puns. Underneath the slapstick are political references from everything to Brexit, sexuality and cross dressing. Heady, bawdy, thrilling and highly satisfying, Long Lost… may not quite do anything truly original with the scenarios and characters. But when the fun is this anarchic and intelligent it matters not.

Nothing quite tops the end of act one where audience members are brought on stage to simulate the storm of The Tempest, whilst others in the front row are armed with water pistols to shoot our performing American trio as they change at such breakneck speed that wardrobe malfunctions and corpsing abound. The water pistols ultimately turn on the audience. It’s a dangerously transgressive moment, and a few more like this wouldn’t have gone amiss. Would the Bard himself have produced something like this in 2017? Undoubtedly.