The house lights are still up when the cast walks on to the stage where four tables are arranged in an oblong and covered in the debris of a script read-through: highlighter pens, plastic cups, a bag of satsumas, a box of Quality Street. They dim only gradually over the first five minutes of the play, during which a narratorial mode is established that runs throughout. Characters are acted, but actions, thoughts, set, and even speech, are described by other members of the cast.

David Tushingham translates Roland Schimmelpfennig’s original German, and leaves us with a very well wrought text: thought-provoking and moving. It succeeds in gently, and then not so gently, introducing into a family Christmas the ideas and the threat of fascism, until all the things we thought were innocuous carry something of that threat – from complaints about the punctuality of trains, to domestic images of the mother and daughter which echo the principle of Kinder-Küche-Kirche. At times the allusions to Nazi Germany seem heavy handed, even in an English translation, and performed in Edinburgh. But they remain effective, and the play successfully builds to a dreaded climax, without for a moment being predictable.

The tension between these two modes – what is acted and what is described – allows for lots of humour. The props are restricted to those that would be present during a typical read-through. So when Corinna’s character is narrated as applying lipstick, Marian McLoughlin who plays her searches about the table, and settles on a highlighter pen, and it is funny to see her performing the playfulness of the actor, whilst remaining in character as the lonely visiting mother. McLoughlin plays this role with charisma and an attention to detail throughout the play – praise every other member of this excellent ensemble equally deserves.

The production is constantly surprising, so that what at first appearance seems to be a limited staging concept is rejuvenated again and again. Everything on stage becomes a potential source of delight. Even the tape markings on the floor are played with, as what is called the “large christmas tree” (really a small paper cut out) is lowered in grandiose slow motion onto a white “X”, marking its spot at the front of the stage. Later, the green tape is stretched out as ribbon, to become another version of the same tree, affixed with the shiny Quality Street wrappers.

This is a delightful, moving and surprising production by Actors Touring Company and Orange Tree Theatre and a wonderfully wrought warning tale of extremism. 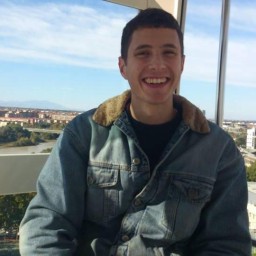