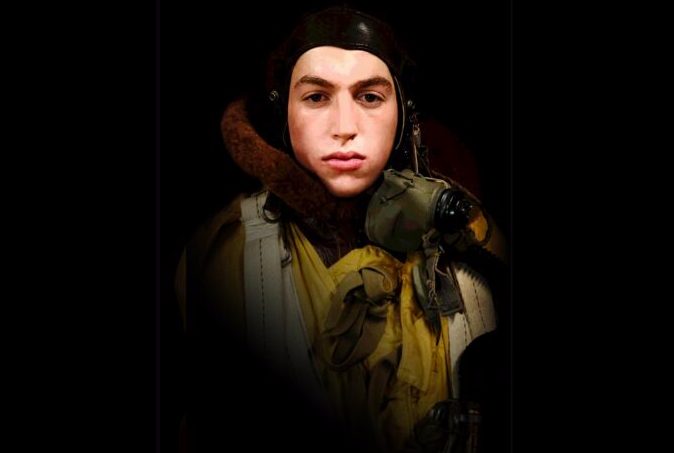 “I’m a killer and a father, how am I going to live with that?” The question at the heart of this powerful and moving one-man show tells the story of John, the titular Wireless Operator on a Lancaster Bomber heading out on one final, perilous bombing raid at the height of World War 2.

Written by Bob Baldwin and Max Kinnings and based on the memoirs and first hand reports of Baldwin’s father, the play is a ferocious dismantling of youth and innocence and a fascinating study of humanity in isolation.

Lit by a solitary spotlight, the audience are immediately plunged into the nascent claustrophobia of the plane’s cockpit, shrouded in the perpetual hum of its engines and the crackle and chatter of John’s crewmates.

The play begins with some startling facts. How John had been a carpenter before volunteering for service and, even though a tour of duty was thirty flights, we find that his crew are embarking on their 35th bombing run. Only one in six would survive their first tour of duty. Yet, still they go on.

Everything that happens on stage is communicated through a quite astonishing performance from Thomas Dennis. In a breathtaking display of emotional and technical bravura, we live out the loneliness and terror of his mission and look inside the soul of a young man struggling to make sense of why he is being asked to rain fire and destruction on the lives of people in the cities below.

Central to the piece is a moveable ironwork frame which wraps itself around Dennis and allows him to depict the pitch and yaw of every dive and evasive action. The ingenuity of movement from both stage and performer adding marvel and physicality to the story as it unfolds.

The heard but unseen voices of the crew are ever present, shot through with gallows humour and, as the sortie begins to unravel, along with John’s faltering grip on reality, thoughts of impending fatherhood and life with the legacy of combat begin to take their dreadful toll.

Amid the cacophony of flak and machine gun fire, the essential goodness of John’s character reaches out of the destruction as past encounters and hopes for the future drift across his face like clouds in the night-time. The shock of each impact is softened into slow motion, with Dennis expertly portraying the shock and illusion of weightlessness as the crew desperately searches for a way home.

Wireless Operator confronts, in gripped, unflinching detail, the mental and emotional cost of war, long after the fighting has stopped. The terrible paradox of conflict that means saving your own life by taking the lives of others. How are these young men supported after they return? Who will listen to their story? How will they endure?

These questions will linger.