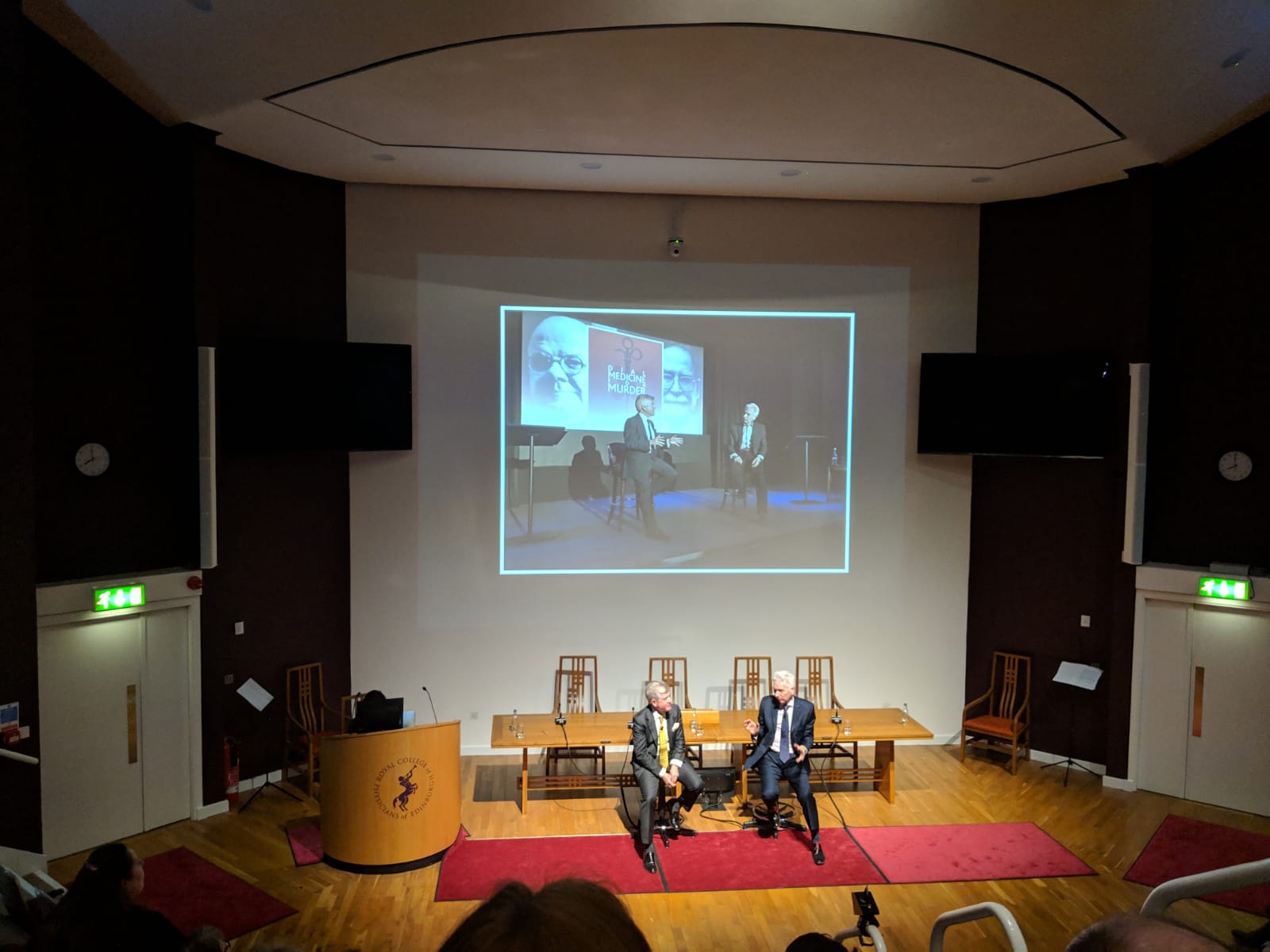 The psychology of a murderer is a fascinating, although deeply controversial thing. Should we slap pictures of mass-shooters and serial killers over 24-hour broadcast news? Should we splash them across tabloids and broadsheets, naming them, shaming them, celebrating them?

The Royal College of Physicians of Edinburgh, is quickly becoming my hunting ground for a good feature. Its tall auditorium housed hundreds of spectators on the evening of Thursday 28th February to learn more about the minds of Britain’s most sinister and prolific murderers, Dr Harold Shipman and Dr John Bodkin Adams.

Dr Brünjes and Dr Johns have toured the UK with Dial Medicine for Murder since their Edinburgh Fringe show last year. They delight the audience with their storytelling, comedy, music and visuals; it’s a lecture you wish your university professor gave. But unlike a normal lecture, these two men of medicine have a genuine relationship to the murderers and their story.

The stories of both Shipman and Adams are told together. Dr Brünjes takes on Adams after admitting as a young doctor at Guy’s Hospital, he attended the same social club as the mad doctor in his elder years. Dr Andrew Johns takes on Shipman – as the forensic psychiatrist who gave evidence at his trial. The story that unfolds will explore two murderers with two verdicts – a surprising and frustrating look into how both doctors managed to get away with their crimes until the last minute.

On the death toll, Shipman is believed to be 250 people; Adams, 150. Yet only one would face punishment. As Dr Brünjes states, “one of them would have been hanged if he was found guilty, the other hanged himself”.

We learned how the good doctor, John Bodkin Adams, with his childlike rage and God-fearing childhood would concoct a way to murder the wealthy widows of Eastbourne in the 1950s and forge wills to obtain their priceless cars, jewellery, and money, with patients of his even buying him properties in the wealthy seaside town.

Dr Johns explores Shipman, a case still raw in many of the audience’s memory. Shipman, demonstrating narcissistic tendencies and a quiet rage, was convicted for the murder of 15 of his patients. He injected lethal doses of diamorphine, clinical heroin, into his patients, and still protested his innocence in court. As a young medical student he was present at the death of his patients 20 times more than an average doctor. The jury took six days to convict. He hung himself in his cell in 2004.

As for Bodkin Adams, the jury took 44 minutes to place a verdict of not guilty. He was struck off the medical council for a few years, but was allowed to return to practice. He died from heart failure in 1983. The crowd, sniggering at times and gasping at others, was hooked on Dr Brünjes and Dr Johns’ every word as these stories were told again.

The ethical debate regarding the celebrity of serial killers will roll through newsrooms and Twitter feeds for ages to come. But the fact is, murderers are interesting: a fact demonstrated by the astonishing turnout. Our hosts closed with one note of confidence, though: “You’re more likely to die in a plane crash, than be treated by the next Dr Shipman…”