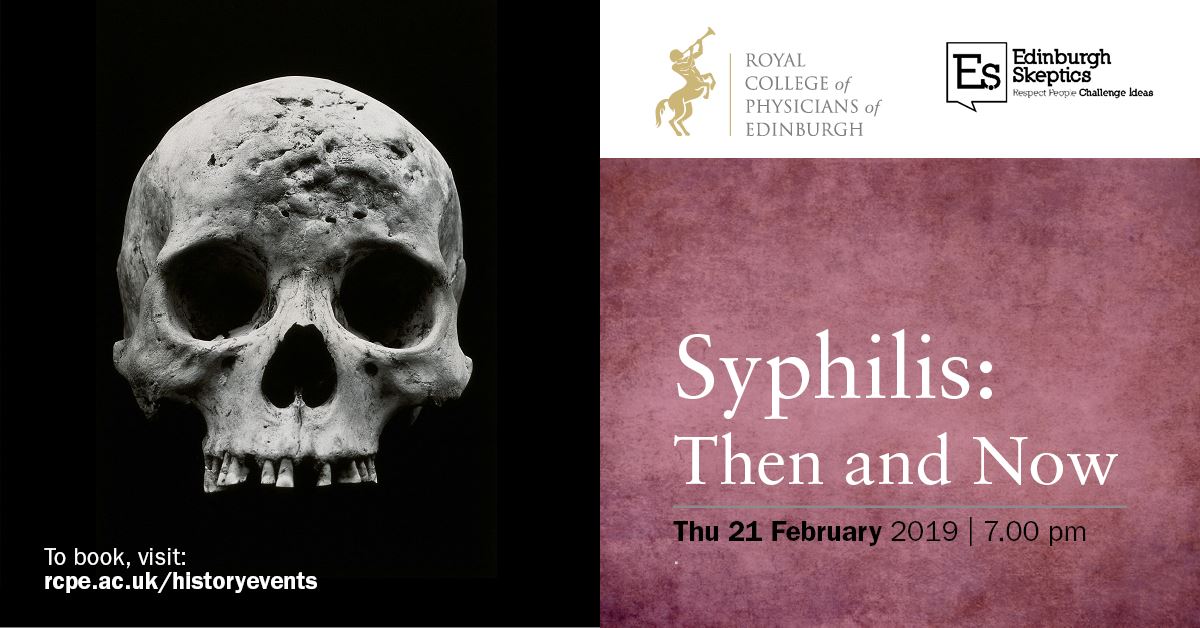 Syphilis: Then and Now

Syphilis - not everyone's idea for a great night out, but Ryan Latto finds the RCPE lecture on it fascinating

Edinburgh is a festival city. If you want theatre, arts, music, literature, and comedy, then the capital has an overwhelming amount of material to sink your teeth into. But there are fringe members of society who sometimes require something a little bit different; something a little more grim.

A night in with two experts on microbiology may not sound like your average Thursday evening but I couldn’t pass up the opportunity to do just that. At the Royal College of Physicians of Edinburgh lecture theatre on 21st February, I shared the evening with members of the public and the Edinburgh Skeptics Society (who apologise for their  American spelling) to delve into the gruesome and yet fascinating world of the French Pox, more commonly known as syphilis.

Did you know that Aberdeen council banned prostitutes in 1497 because of the fear of this ravaging disease that seemed to cause painless ulcers, disappear, and then curse the flesh with rashes, searing sores, puss-fulled ulcers, facial disfigurement, and madness?

Or that James IV signed off the Grandgore Act in the same year to ship victims of this dreaded “French Pox”  to quarantine the infected on Inchkeith Island in the Firth of Forth? They were sent there from Leith and told not to return until “God provide for their health”. I guess we shouldn’t complain about the NHS anymore.

Europe has a colourful history of diseases, but syphilis has never been as popular as the Black Death or smallpox. However, PhD candidate Mona O’Brien and NHS Microbiologist and self-proclaimed Bat Nurse (@The_BatNurse), Tracey Jolliffe, brought their research of the past and present life of syphilis to Edinburgh, discussing the beliefs about the disease such as it being the “wrath of god” or the wacky use of mercury as a cure, which worked… by killing you as well as the disease.

Tracey and Mona delved into the symptoms and consequence of syphilis, but interestingly laid bare the fact that very few of us, despite increasing rates of the disease, will ever get the more dangerous latent stage syphilis. The disease is so responsive to antibiotics, and hasn’t actually mutated for hundreds of years, that if you take some penicillin for your bad chest you’ll obliterate the disease before it can cause you real harm. The rates for latent stage syphilis in the UK are basically negligible.

That wasn’t the case during the early-modern period where instances of this disease (constantly referred to as “French Pox” despite having nothing to do with France, much like the “Spanish” flu) were widespread and misunderstood.

Mona, however, highlights the charitable nature of early-modern Europe. In fact, many councils assisted those who were sick and dying with this disease. Quarantine camps, not unlike our Grangore Act, were set up across Europe to separate the sick from the healthy. But councils couldn’t stop there. Many camps were outside the city walls and still in the parish or jurisdiction. Considering someone’s level of poverty – either kindly being labelled “deserving poor”, a local labourer fallen on hard times, or “undeserving poor”, basically a foreigner – council doctors would help with the illness by administering a rather brutal mercury concoction.

Syphilis, with its sinister ability to mask symptoms, was so misunderstood that we still administered mercury to patients well into the 19th and early 20th century by injection into the muscle. A compound made up of arsenic, Salvarsan, was also used well up until 1947 when penicillin finally won the award for the cure of the century.

Those with latent-stage syphilis, which can appear literally decades after the onset of the disease, could go mad, with the bacteria infecting their spinal column and causing a strange walking gait and “paralysis of the insane”. When walking around Edinburgh’s closes and ancient streets, I wonder how many people witnessed those suffering with syphilis, plague, pox, and parasites. Edinburgh was called Auld Reekie for good reason, and the author of that phrase himself was said to have died with a syphilitic brain.

I always find these events comfortably quirky. People who attend them are lovely and fascinating in their own right. Sitting alongside people whose interests aren’t just the latest Netflix series or Brexit confusion is refreshing and there is magic to be found in watching other people talk about their passions and research. And what else could be more romantic, exactly one week after Valentine’s Day, than an hour long seminar on the history of a global STD.