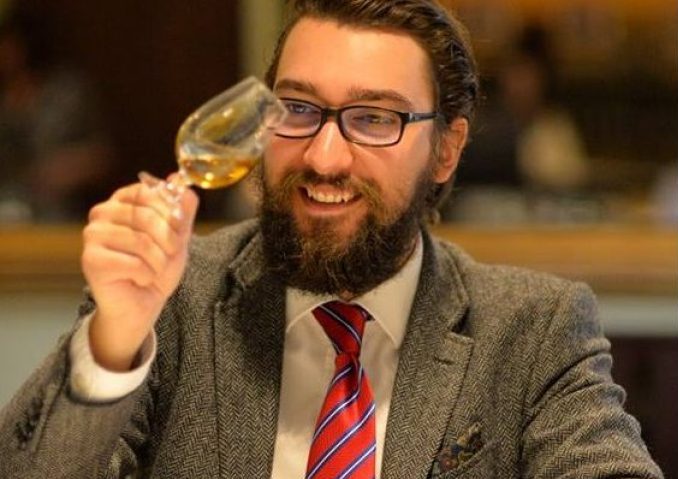 Feast your eyes on these food and drink shows

When I’m not reviewing for The Wee Review during the Fringe, I spend my spare time as a food blogger and write for EdinburghFoody. I’ve scoured the Fringe programme and whittled down the 3,500 shows to my top 20 food and drink events.

Award-winning stand-up comedian and cook, George Egg’s (Assembly George Square) new show, Moveable Feast, will have you laughing and salivating in equal amounts. In this show, he’s on the road. It’s time for Planes, Trains and Automob-meals.

During an hour of live cooking, George will demonstrate how to cook with an engine, get the most from the car battery and even utilise the roof rack. He’ll demonstrate ways to procure items from the train buffet trolley, beat the rip-off restaurant prices at the airport and show how to turn unexpected road-works into a picnic. A multi-sensory show rich in humour and sprinkled with handy hacks, three plates of gourmet food will be cooked live in the most unconventional ways and with the opportunity to taste the results at the end.

Table Manners with Jessie Ware (Gilded Balloon) is the official Fringe premiere of the live version of the smash-hit podcast that Jessie Ware hosts about food, family and the beautiful art of having a chat, direct from her very own dinner table. With a little bit of help from her chef extraordinaire mum Lennie, each week guests from the worlds of music, culture and politics drop by for a bite and a bit of a natter.  You’ll need to be quick though as it’s only on until 4 August.

Michelle Pearson, Australia’s singing cook presents her award-winning musical cooking cabaret, Comfort Food Cabaret  (Imagination Workshop). It’s a real gem of a show. You’ll be serenaded by the soulful songstress as she cooks you a decadent three-course dinner. Prepare to be delighted by Michelle’s indulgent cooking, her remarkable sound and interpretations of popular rock, pop and jazz hits accompanied by her well-fed musicians. Don’t miss this unique musical dining experience! Dinner is included in the ticket price.

Another show from Michelle is her UK debut of Just Desserts (Underbelly Cowgate) which won the Winner of Best Cabaret (weekly) at Adelaide Fringe 2019. Featuring a live rock-pop-powered soundtrack, this sensual chanteuse explores empowerment, social pressure, our obsession with perfection and desire through song, sex and sugar. Includes dessert.

Fawlty Towers the Dining Experience will have you join Basil, Sybil and Manuel as they serve yet more laughs and a three-course meal.   This is the original, internationally acclaimed show that’s 70% improvised, highly interactive and completely immersive. I can’t vouch for the quality of the food served up (it’s still on my list of shows to see) but as it’s a show that returns year after year, its popularity has obviously stood the test of time.  It should be a guaranteed good laugh.

After eight years of sell-outs, the Thinking Drinkers return with a brand-new, intoxicating look at history’s greatest drinkers, Heroes of Hooch (Underbelly Bristo Square). Enjoy five free drinks as the award-winning experts reveal how alcohol has inspired pioneering explorers, politicians and painters in equal measure, from Plato and Picasso to Nelson, Napoleon and Norm from Cheers. You’ll learn a lot and laugh a lot.

After all this talk of food and eating, you might want to consider the battle with weight-loss.  Comedian Daniel Lobell isn’t quite the man he was at last year’s Fringe, having lost 50lbs. In Tipping the Scales (Underbelly, Bristo Square), he reflects on his life-long struggle with weight-loss.

With the death of a close friend who was also obese, Daniel set out on a journey to shed a few stone and conquer his addiction once and for all. Daniel talks about all the funny, crazy, and difficult things we do to try and lose weight, and what his journey has been with all of them. From Weight Watchers to the Atkins diet, and most recently spending time in rehab for people with eating disorders, he’s tried everything in his life-long struggle. In a world that’s consumed with how much we consume, losing weight remains one of the toughest things to do, as Daniel explains in this hilarious and moving story.

After all this food, why not take part in one of the many walking tours? That way you can offset the guilt, albeit for a little while.

Real Mary King’s Close, the five-star visitor attraction located underneath the Royal Mile, is teaming up with local herb and gin experts – The Old Curiosity Distillery – to offer the Old Curiosity Underground gin-tasting tours.  Paying homage to the famous illicit gin trade of 18th century Edinburgh and the plague doctors who used botanicals to ward off disease, the late-night tour at 9.45 pm will be an opportunity to learn about the origins of gin production in the city while enjoying a range of exclusive and specially selected Old Curiosity gins, deep underground in the historic city.

Visitors will learn about why the Dutch traded genever (gin’s precursor), the adventures of local smugglers, and the distilling innovations that led to Edinburgh’s lengthy love affair with this chameleon spirit. They will get the chance to explore the life and times of Edinburgh’s first plague doctor – Joannes Paulitius – to discover why herbs were thought to protect the doctor from deadly plague epidemic and why he wore the distinctive beaked mask.

The late-night 90 minute guided tours cost £35 and take place every Wednesday in August and Saturday in September. Accompanied by a gin expert, visitors will be given four gins to taste, including Apothecary Rose, Lemon Verbena, and Chamomile & Cornflower, followed by a plague doctor inspired Lavender & Echinacea gin cocktail.

Or try Barney’s Brewery Tour and Walkabout.  Step behind the old horse stable doors and discover Summerhall’s very own brewery: Barney’s Beer, who coincidentally I worked with at Scottish Courage, many moons ago. Delivered by award-winning ScotBeer Tours, you’ll discover the history of Scotland through beer and stay to socialise with your new friends.  Beer is included.

Or while at Summerhall, take a jolly around a working gin distillery with Pickering’s Gin.  G&T in hand, you’ll explore Summerhall Distillery to see how craft gin is really made – oh and you’ll sample some award-winning gins along the way.

Or you might want to take in the Edinburgh Gin Safari with Nell Nelson. Get off the tourist drag and onto the gin trail: seeing the New Town through the gin-tinted spectacles with gin liqueur cocktails, G&T toasted marshmallows, and gin-cured salmon on this two-hour walking homage to gin.

Or if you’d rather not have an active two hours, join The Scottish Cafe & Restaurant’s iconic afternoon tea, specially enhanced with flavours of Edinburgh Gin’s sensational liqueurs. Edinburgh Gin Afternoon Tea guests will be given priority seating on their sun terrace (only good if the sun is shining).

If whisky is more your thing, head to Cannonball Restaurant who will be serving up Glengoyne Distillery’s Teapot Dram Batch No. 6 paired with an afternoon tea  (£25) throughout the Fringe.  The Teapot Dram series pays tribute to dramming days gone by. Until the 1970s, workers at the Highland distillery would receive three fingers of whisky three times a day, drawn from first-fill Oloroso sherry casks. To save face, the less seasoned stillmen would discreetly pour their drams into a copper teapot which sat on the canteen windowsill ready for their colleagues to enjoy.

Arbikie, Scotland’s leading field-to-bottle distiller and the world’s first single-estate distillery producing vodka, gin and whisky from the crops grown on their farm (barley, wheat and potatoes) are holding Arbikie Gin Masterclasses, at Merchant’s Hall (3 pm). Join them on a field-to-bottle journey as you explore their international award-winning Kirsty’s and AK’s Gins.

The Arbikie team will guide you through their world-class spirits, distilling process and perfect serves. As part of your ticket, you will receive a welcome cocktail, tasters and the chance to create your own perfect serve.

Or catch a couple of other masterclasses, also at the Merchant’s Hall.  Tomorrow, you can taste and learn about whisky with Blair Bowman (3rd August) the author of the bestselling, “Pocket Guide to Whisky”, featuring the WhiskyTubeMap or a Whisky Masterclass with Charles Maclean (17th August). Charles has been researching and writing about whisky for over 35 years so he certainly knows a thing about Scotland’s national tipple.

And while you’re there, you might want to catch a fantastic mix of live music shows, stunning Arbikie cocktails and table-service food at the A Club at Merchants Hall.  Throughout August you can relax and unwind whilst enjoying some of the world’s top shows of pop, jazz, folk and rock music including George Michael Songbook (17th), The Absolute Jam (various dates) and the Polis (various dates).

Next week, The Edinburgh International Book Festival starts (10-26 August).  Charlotte Square is a real haven away from the busyness of the Fringe.  As usual, the Book Festival will have lots of great talks to whet your appetite including their food-themed The World On A Plate.

Created with author and food and drink entrepreneur Nikki Welch, the food strand at this year’s Book Festival has an irresistible series of events with internationally-renowned chefs who’ve written down their culinary secrets so that we can reproduce them at home; it also includes a range of afternoon teas and tastings.

Alongside this vibrant celebration, authors discuss the challenges around production and distribution. Earth’s capacity to produce the food we enjoy is being undermined by our failure to protect biodiversity, according to a new UN study – an alarm bell we’d do well to listen to. Fortunately, it’s not too late to change and they’ve got authors offering their perspectives in conversations which, whilst serious, also rejoice in the incredible array of cuisines still available to us from around the globe.

And if you want a recommendation, don’t miss Afternoon Tea with Ghillie Basan (Monday, 19 August), just one of the many events which will see you fed alongside listening to some really interesting discussion.

Combining global flavours with the whiskies and natural larder of Scotland, Ghillie Basan’s new book, Spirit & Spice takes readers on a culinary journey around the world and back again – to Ghillie’s home in the Highlands of Scotland.

So there you have it, my top-pick food or drink shows to feast your senses on this August.  Go out and #Make Your Fringe.