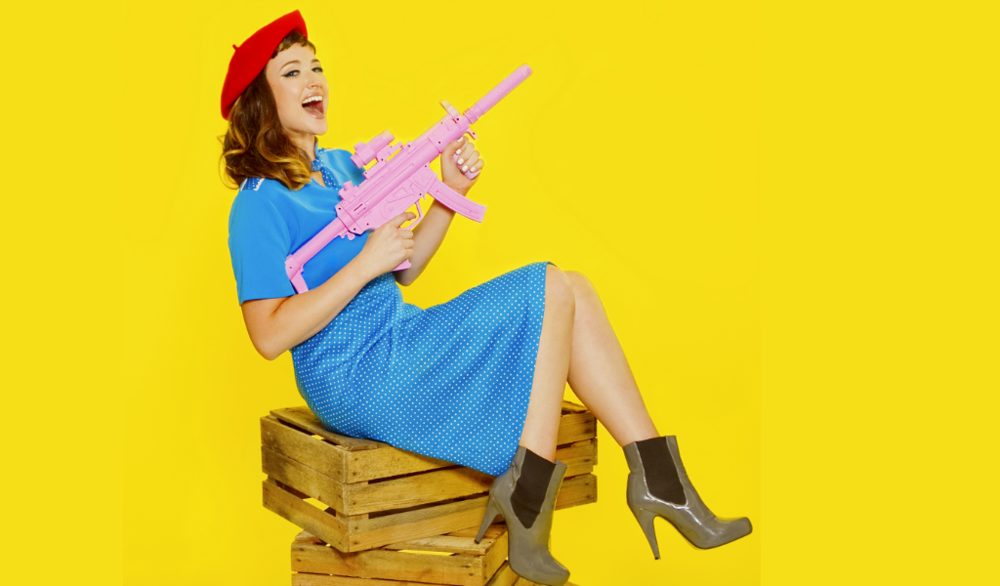 A Girl and A Gun

Louise Orwin challenges the use of guns in popular culture.

French new wave filmmaker Jean-Luc Goddard has come up many memorable quotes in his long career. “All you need to make a movie is a girl and a gun” is one of Goddard’s best known statements and it is the inspiration for Louise Orwin’s new show A Girl and A Gun.

The performance take place in the Anatomy Lecture Theatre of Summerhall and involves a male performer who has never read the script before. He is playing the role of ‘Him’ and is reading the script from a monitor that is facing him from the front of the performance space. Louise Orwin is taking on the role of ‘Her’, a helpless Southern dame with a sultry accent. Louise devised the show after noticing the increase of images of guns in popular culture and wanted to question Godard’s statement.

A Girl and A Gun is a series of scenes in which movies are referenced and the typical roles that men and women play in these movies are played out onstage. The performers take on the persona of a hero and a damsel in distress. Guns are seen as objects of empowerment and women are seen as objects to use and abuse. The audience takes on the role of voyeur, as the scenes play out in front of us. We are helpless as ‘Him’ takes advantage of ‘Her’ and it is awkward viewing. We know that ‘Him’ is as enlightened as the audience and that he has no idea to what is coming next. This makes the shocking imagery that is presented feel more real and gives the points raised an added depth. We see a performer taken out of their comfort zone and it is challenging to witness.

As well as movies A Girl and A Gun references video games. At one point during the show a first person shooter game is projected on to the back wall. Here we see how violent images go beyond cinema and find their way into other forms of popular culture. Louise Orwin has presented an excellent show that looks at violent and sexualised images and how we consume them. The ending is abrupt and shocking and the audience leaves the performance space with a lot to think about. A Girl and A Gun is challenging, intelligent and a very important production. It asks series questions and tests the audiences in new and exciting ways.