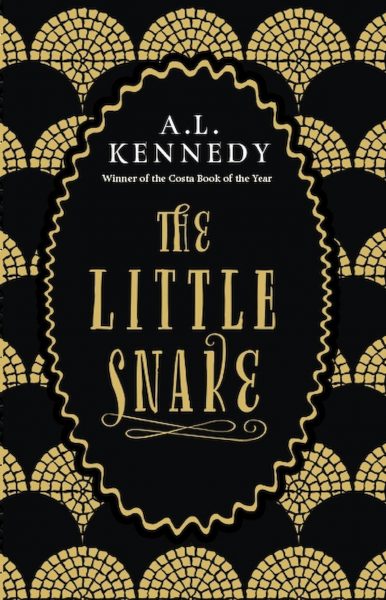 Multiple award-winning writer A. L. Kennedy’s newest work is another example of her versatility. In contrast to her previous novel, Serious Sweet, The Little Snake is a novella that crosses readership boundaries and lies somewhere between fable, magic realism and biblical allegory. Perhaps the fact that the book was commissioned in Germany partly explains the Grimms-esque fairytale premise.

The narrative focuses on Lanmo and Mary – a golden snake and the young girl he befriends. After meeting during her childhood in a busy city full of happiness and beauty, the pair weave in and out of one another’s life over the course of several years. Each time Lanmo returns to Mary, he notices the changing features of the cityscape and tastes the differences in the air. The third-person narrator fixes on Lanmo’s point of view, and it is through this clever choice that we soon understand that the city is being ravaged by war and get to see its fallout. The exploration of this theme is particularly poignant in a chapter recounting the story of the country’s sardonically-titled leader, “The Great Man Who Loved the People”.

It is in observations like these that the novella becomes more than a children’s story. Kennedy’s subtle allusions to real-world events are striking and sad without ever preaching to us or hitting us over the head with morality lessons. Arguably the book’s main focus isn’t even politics. When Lanmo is not with Mary, we follow him as he encounters various other characters living out different lives, and are given touching visions of the elderly and people living in isolation. Lanmo becomes a representation of death, reminiscent of The Book Thief’s extraordinary narrator, deciding when to dish out fatal bites to those he encounters and quietly end their time on earth. However, towards the book’s climax we see a change in him. Through the love shown to him from Mary, the love he has seen in the world, and the love he learns to give, Lanmo breaks away from his animal instincts and finds a better way to live.

Kennedy’s skill lies in the deceptive simplicity of her language here. Nothing is overly verbose or extraneously descriptive, yet abstract and profound ideas are pondered. It is this that makes The Little Snake work on several levels. For younger readers it will be enjoyable as a mythical story that is funny, sweet, and emotive. For an older audience, the novella presents a moving allegory of life, death, perseverance, and kindness. It is philosophy disguised as fairytale.