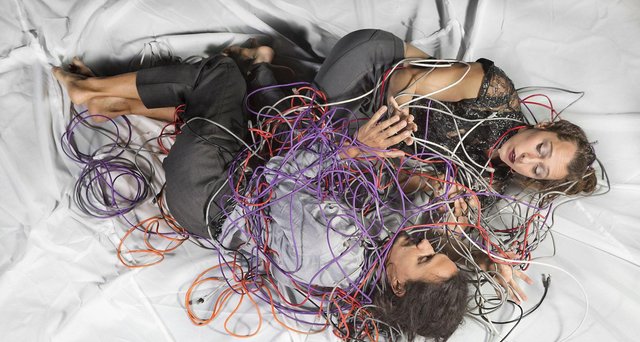 A Wire Apart by Paper Doll Militia explores whether technology helps or hinders when it comes to building relationships. Featuring a fascinating blend of tightwire, aerial work, movement, dance, spoken word and a rich aural soundscape, it depicts a couple first tentatively meeting, greeting and then endeavouring to make a personal connection amidst more clicks, swipes and ye olde internet dial-up sound effects than you can shake a stick at.

Sarah Bebe Holmes is one of the lonely souls, reaching out across the digital divide to make a connection with Bado Reti. Holmes, as well as incredible aerial artistry, bring a touching pathos to her role. Reti, as well as battling out of terrifying bundles of physical wires, has created the eerily futuristic soundscape that nicely evokes the discombobulating isolation that tech can bring. Both have mischief in their eyes and a desire to defeat the yawning enforced divide.

The performance is filmed but this isn’t any old film of a piece of visual theatre. Ray Bird of Rare Bird Media has done a tremendous job of taking the production and serving it up in a way that feels as up close and personal as you’d hope for a Fringe show. There’s something extra impressive about seeing someone walk a tightwire when the camera’s focused right in on their little human foot. Visual effects applied to the film dramatise the digital synapses humming and whirring, firing the human synapses like crack cocaine.

Ultimately, while an enormously bold endeavour and a tremendous use of both performers’ talents, the narrative thread is a little thin here to make for a truly satisfying show. There’s also a curious irony in the fact that a production about how technology keeps us apart, is being served up digitally. But these things aside, Paper Doll Militia have delivered a piece of theatre that’s part circus, part aerial feast and part cinematic treat and for this alone, it’s worth a watch.