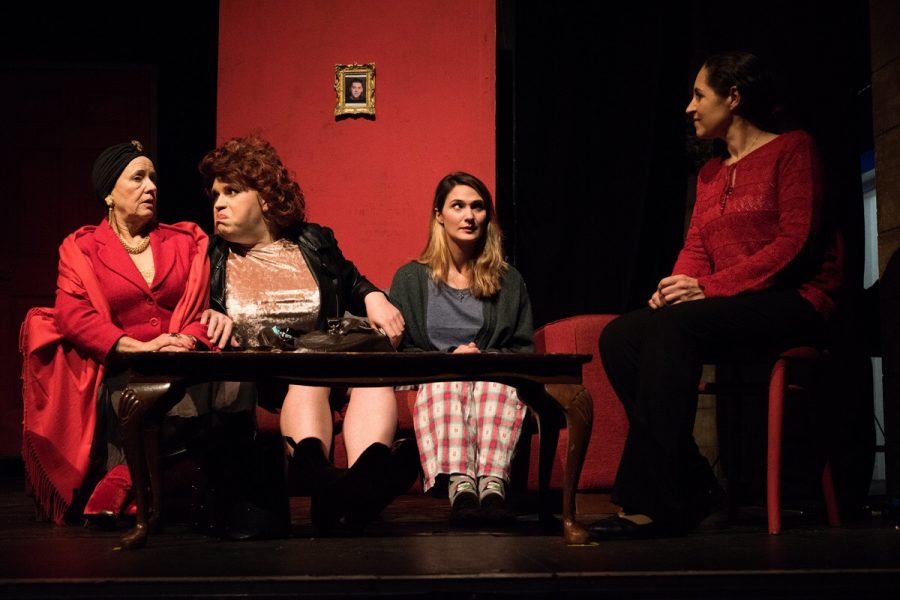 All About My Mother

It is undoubtable that Pedro Almodóvar’s seminal film All About My Mother was a groundbreaking portrayal of AIDS, trans people, and sexuality when it was first released in 1999. Indeed, its recent translation to stage has proven that many of the issues it addressed are still relevant today, although the portrayal of transgender people within the production is somewhat outdated by today’s standards. That being said, Edinburgh Graduate Theatre Group’s adaptation does a valiant effort of remaining loyal to the original film and production. Despite their best efforts, however, this production is marred by a few issues.

The small nature of the Assembly Roxy creates a great sense of proximity for both the characters on stage and the audience who are consequently drawn into the lives of Manuela, Rosa, and Agrado. This is especially aided by aided by the cabaret-style feeling of the stage itself, protruding into the audienxe and adding to the immersion brought about by Agrado and Esteban’s monologues.

Unfortunately, the stage is also one of the production’s greatest hindrances. Owing to its small size, and the company’s level of ambition, the stage feels incredibly cluttered with excessive set and prop use. This leads to several technical issues throughout the course of the play. Blackouts and scene transitions last far too long, as the set is dismantled, and even then stage-hands frequently appear on stage to add props or move set-pieces, distracting the audience from what is happening on stage.

This ultimately affects much of the performance too, with the aforementioned monologues -while wonderfully performed- feel like padding to facilitate a more cohesive change of set. Thankfully, there are some excellent performances in this adaptation of All About My Mother with Thomas Timms’ Agrado being a perpetual delight to watch, effectively stealing the show in every scene. Similarly, Hilary Davies and Abbye Eva give strong performances as Huma Rojo and Nina Cruz (respectively), with the chemistry between the characters shining through.

Director Ross Hope clearly has a great deal of love for both Almodóvar’s original film and the recent stage production on the West End, having spoken about his attempts to bring a stage production of All About My Mother to life. As such, his direction of the cast is highly commendable, and the play is enjoyable overall, but one cannot help but feel that this enthusiasm has led to something that is overly convoluted and far too ambitious.