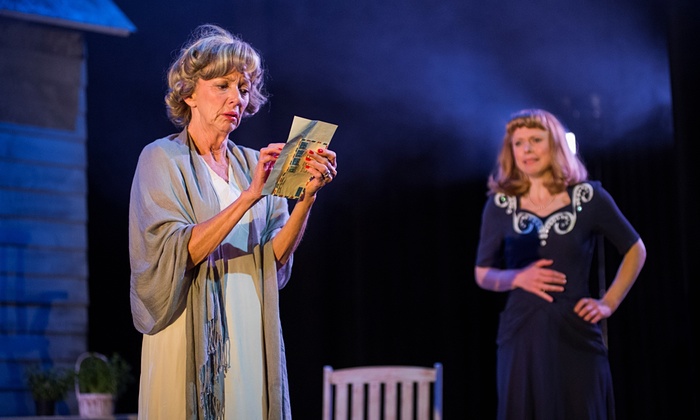 [rating:3/5] Rapture's production of Arthur Miller's All My Sons is a solid, if uninspiring, introduction to this lynchpin of modern American drama.

Addressing the ambiguous morality of the American Dream with Arthur Miller’s usual elegant damnation, All My Sons revolves around a small-time businessman, Joe Keller, and his family – still grieving over the death of their son, Larry – whose carefully-buried secrets begin to resurface at the return of Larry’s ex-fiancée to their curtain-twitching suburban neighbourhood.

Stepping into the role after original lead Paul Shelley dropped out due to illness, David Tarkenter introduces something of the retired mafioso to his taciturn Joe. However, while his gruff strength is well-marked, the all-encompassing familial love that drives Joe is drastically underplayed. Offering the audience too little to sympathise with, Joe’s fate is tinged almost with smugness.

Trudie Goodwin is a fine if slightly frail Kate, missing the fierceness of her character’s grief. Similarly, returning fiancée Ann (Bryony Afferson) seems too content for a young woman tearing ghosts of past crimes and dead lovers out of the Keller’s manicured lawn. Of the principal cast, Robert Jack alone stands out as the forgotten son, Chris, a fully-rounded character palpably struggling to reconcile the minutiae of civilian life with his memories of war.

Sergey Jakovsky‘s haunting lighting literally illuminates Neil Murray‘s rather unimaginative flat-pack set, adding nuance to the stilted suburban landscape, while Craig Johnston’s minimalist soundscape tops and tails each act with the ominous roar of a low-flying engine– a straightforward metaphor for the inescapable tragedy always hovering close by. Perhaps a less naturalistic approach would have done more to heighten the emotional atmosphere.

As always, Miller’s quietly devastating writing soars above production constraints to result in a likeable if unchallenging introduction to this behemoth of modern drama.