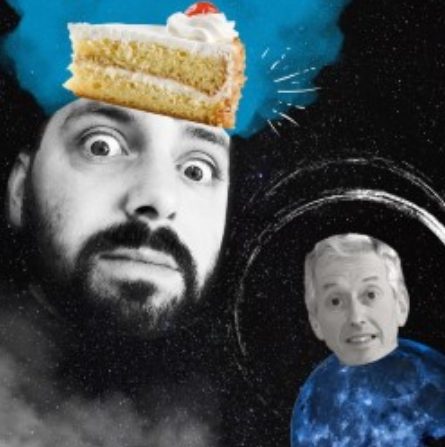 An Idiom's Guide to the Galaxy

Light-hearted, funny trip through an array of idioms, from 'Bob's your uncle', to 'it's raining cats and dogs'.

An idiom is a saying that has a meaning not discernible from the sum of its parts. It is also the subject of this irreverent, light, and genuinely interesting show from Captain Breadbeard Productions. Using idioms as the basis of their set pieces, Dave Watt and ‘Pretty Good’ Nick present an hour of disjointed facts, melodies, and scenarios that promises – and delivers – ripples of laughter throughout.

There are noticeable but forgivable chinks in the armour easily put down to start-of-the-Fringe rustiness, but if nothing else they add to the charm of the whole experience. At some points, An Idiom’s Guide to the Galaxy feels like a lower-budget, more theatrical version of QI, with interesting quips of information being fired at you left, right, and centre. At others it adopts a more traditional sketch comedy act, with impersonations of everything from Catchphrase to Dragon’s Den (except with monkeys). The jokes have an unevenness about them – some of the more localised gags can be lost on an international crowd for example – but Dave and Nick just about have the charisma to carry the show through. Even if you aren’t diving towards hysterics, you will have a grin on your face throughout.

The double act specialise in sketch shows, with Captain Breadbeard’s Bready Brilliant Comedy Cookbook being the other showcase of their talents this festival. At times the show could do with a bit more pace, especially in the first fifteen minutes or so, as the audience initially feel slightly unsure what they have walked into. That being said, the audience participation further down the line works a treat, even with a smaller crowd. The childish glee that Dave and Nick can conjure out of thin air proves difficult to resist.

An Idiom’s Guide to the Galaxy is the kind of low-key, DIY event that the Fringe at its best is born to nurture. There are more polished comedy performances out there, but even so Dave and Nick’s show is as amiable as they come, not to mention as interesting as it is warmly funny.