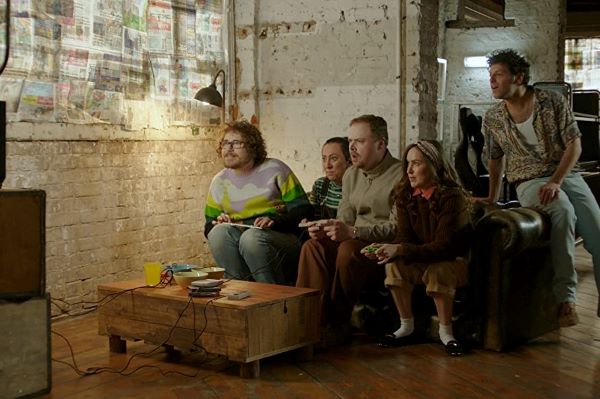 Ashens and the Polybius Heist

Gaming culture is far from a contemporary notion, but browse the sock section of any Primark, and you’ll realise the marketability has skyrocketed for ‘mainstream’ audiences. For decades mysteries and rumours have circulated the industry, none quite as perversely believable than that of the Polybius – an arcade cabinet financed by the US government as a psychological experiment and data-mine in the eighties.

But what if this myth was, in fact, reality? In a year of bureaucracy and cronyism dealings, is it entirely unbelievable for such a machine to be in the hands of those with ill intent? Wouldn’t it be better placed in the grubby mitts of a man who collects the uncollectable, rare and often, useless? Well, Ashens and the Polybius Heist takes science fiction and lands it squarely in the harsh realities of Norwich.

Slayer of Pop-stations, the scourge of Poundland and cut-price Simon Pegg, Stuart Ashen is chiefly recognisable for his popular YouTube channel, known for his equal adoration for and terror of all things tat. Outside of the realms of digital content, Ashen has been linked with various television projects with the BBC, before starring in and writing the short sci-fi film The Proxy, and his first feature Ashens and the Quest for the Game Child.

Within the initial twenty minutes of the film, the audience grows to realise that the often associated comedic reviewer is a strikingly adept performer. Polybius Heist is only a spiritual sequel to Ashen’s initial outing with Game Child but has evolved and taken on the issues the former possessed. A comedy first, dramatic family story second, Ashen’s second feature is an evident passion project which kindles grins from familiar fans and newcomers. A slew of familiar faces emerge as the narrative unfolds, some with clear plot significance and others a cheerful reminder of the network of talent Polybius Heist calls upon, particularly television treasure Robert Llewellyn.

Don’t be fooled, the cynical would see a roster of YouTubers, content creators and streamers and grit their teeth, but this couldn’t be a more invested band of miscreants. These creators are lovers of cinema, and their scope of appreciation extends beyond the realms of referential scripting. Packing quite the pace, Polybius achieves a largely continuous flow, rather impressive given the relatively short run-time and abundance of characters. Director Riyad Barmania possesses an understanding of the film’s comedy, and wherever individual cast members will excel in roles, knowing how to reel them in or allow them to run hilarious riot (Jarred Christmas). Not all jokes land, and the occasional awkward delivery stalls momentum, but the overall narrative refrains from stagnating, or indeed rushing, all framed within the atmospheric composition of David Stowell.

Perhaps enjoying themselves the most are fellow YouTuber Daniel Hardcastle, Alyssa Kyria and heart of the film Yiannis Vassilakis. But the excellent Katia Kvinge’s place as Vocal, the crew’s impersonator, and the charming Barry Lewis connect with the audience within moments, and it’s a genuine shame, especially for Kvinge, that their roles slow following their initial introduction. The remaining cast chiefly fills the roles for the heist portion of the film, each drawing on their unique skillset to aid Ashens in his quest to thwart Antony Agonist (Stuggy) and reclaim the Polybius.

An escapist heist which bathes itself in a brilliance of references and comedic performances, Polybius maintains a capable filmmaking structure which pushes the film into a fine piece of cinema in its own right. Ashen and his motley crew herald an energised creation, with a multitude of obvious, subtle and visual gags which cradle the pastiche narrative of a writer whose passion for filmmaking is as evident as his mark of excellence.