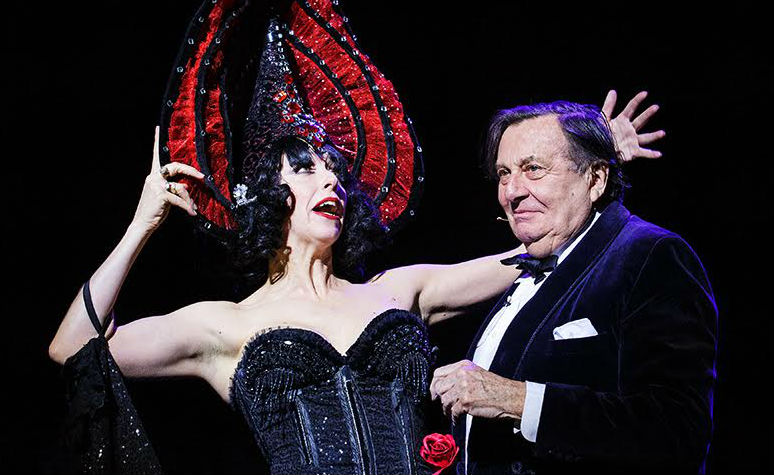 A belting set of vocal cords

A winner from the off as an idea – beloved Aussie comic icon Barry Humphries programming and presenting a decadent selection of personal favourites from 1920s Berlin – this Weimar Cabaret evening nevertheless lacks a little atmosphere, on account of the staging rather than Humphries or singing co-star Meow Meow themselves.

Humphries found the sheet music of these works in a suitcase in a second-hand bookshop in Melbourne in the 1950s, the former possessions of a Jewish refugee. Laden with meaning, the pieces had Humphries fascinated, and left him searching libraries and record shops for more detail. He shows obvious delight in having been able to put this evening together, with the Australian Chamber Orchestra performing and cabaret star Meow Meow singing. Now in his 80s, Humphries himself retains all the presence and timing of a natural raconteur. He’s passionate and knowledgeable on his subject, references his friendships with the likes of Billy Wilder without seeming name-droppy, and is neat at setting the music within its contemporary political and his own personal context.

It is remarkable how varied and experimental the programme is too, encompassing jazz, classical, very early electronic music, a Philip Glass-like vocal piece and tango by the likes of Weill, Spoliansky, Schulhof and Krenek. There are real curios in and amongst. One piece has only been performed three times since its premiere. The creative flowering of Germany in this period is made abundantly clear, and the subversive joy and indulgence of the era obvious.

But therein lies the problem. That decadent joy is written on the faces and across the performances of Humphries and Meow Meow, but a combination of factors stop it truly transporting us. Meow Meow is fabulous – playful, full of mischievous sexuality, and, needless to say, possessed of a belting set of vocal cords, that can wrap themselves round chansons, a capella and semi-operatic numbers in German, English, French, and erm… sex noises. And Humphries makes a charismatic host, who mocks the dodderiness of old age as he dances with his partner. Either element on their own would make for fabulous entertainment.

Yet the Usher Hall is too formal and grand a setting for this. The music calls for the clink of wine glasses and sashaying of skirts. Usher Hall stifles all that. And the chamber orchestra feels too stiff, too regimented, even in their 1920s clobber, and too apparent, an alternative focus that draws away from the main performers. The audience is complicit in this, barely tapping a foot. Maybe the unfamiliarity of the music doesn’t help, maybe an added Alabama Song or a Mack The Knife (we get a small snippet at the beginning) could have given it a bit more swing, but either way, it’s a shame such fabulous music ends up feeling under such stricture.