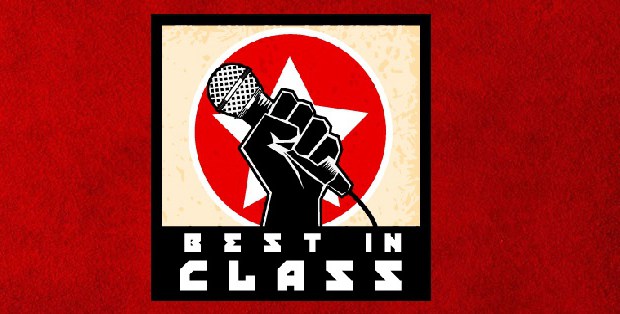 This compilation show was born out of circumstance. Sian Davies was denied a place on another Fringe showcase because she couldn’t stump up the cash (full story here) so she set about doing her own as a co-operative venture with other comics from straitened circumstances. She is, as another of today’s performers Tom Mayhew says, “a working-class hero” who has helped people have a Fringe they couldn’t otherwise have.

Of course all this is but nothing if the comedy’s not up to much, but there’s no worries on that score here. What we have, unlike some other line-up shows, is performers who may be limited in wherewithal, but not ability. Each of today’s guests would be capable of carrying their own Fringe hour, if not now, then soon. Davies has grafted to put together an excellent showcase.

Davies herself makes a fine compere (★★★★✩). She’s a calm and assured type rather than an in-yer-face rabble-rouser. She deals cleverly with the elephant in the room (a stag in a bridal dress) by misdirecting us to another elephant in the room (his mate with an over-elaborate moustache) and has the dozen or so fairly benign stags bubbling along in friendly manner throughout.

Her own material addresses the topic of class – how she keeps accidentally slipping into middle class ways, her concerns she might be privately educating her dog – and her homosexuality. The gags are tight and polished and just the right level to get the hour rolling.

First guest Kathryn Mather (★★★★★) is a revelation. Current holder of Manchester’s Beat the Frog World Series (which means nothing to people here) she does wonders to boost the profile of that particular accolade. The Rochdale comic does a fine line in lugubriousness (the accent helps) and has some imaginatively skewed takes on things. She gives us a very loose reading of what the Bible has to say about meat-eating, an explanation on why carpentry skills and heterosexuality are not necessarily incompatible in women and, best of all, an appraisal of the stories you get in lowbrow women’s mags. Her own made-up version of one of these is very good indeed. In between times, there’s perfectly delivered asides to keep things moving along. She’s very impressive and it would be interesting to see her with a longer set.

Tom Mayhew (★★★★✩) is no stranger to these pages, having been first encountered as a warm-up act for the mighty President Obonjo in 2015 and again last year when a full solo show seemed a bit of a struggle. He’s noticeably progressed since though, to the point he might be in danger of losing the chronic awkwardness that was his USP. He can look an audience in the eye now, and works some nice laughs out of banter and a selfie with Bridesdress Revisited on the front row. It seems it’s not only Davies who can deal with the stags. His one liners flow, and while the shyness may be fading, the material is still pleasingly deadpan and self-effacing. He looks like he may even be enjoying himself, though you wouldn’t want him to enjoy it too much – that miserabilism is still a good look.

Like the all-female and LGBT line-up shows around the Fringe, there’s a certain regret that these working-class comedians have had to group and self-identify in order to get a platform, especially as there’s nothing to thematically link them apart from a lack of brass. But Davies could be onto a winner here. There’s a hint of the original PBH spirit about its disruptiveness. The Fringe in current form isn’t working for everyone, and if collective efforts like this can shake things up, more power to them. If it’s back next year, Best In Class won’t fail for lack of quality, for sure.