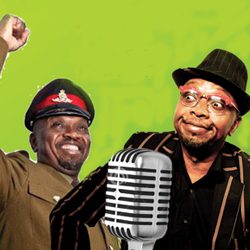 [Rating:4/5] An unsettling, but hilarious hour in the company of an African dictator, or possibly, an ordinary man from St Albans.

Where Benjamin Bello ends and President Obonjo begins is the concept, the comedy and the mystery of this gig. The thunderous African dictator leaves both performer and audience scratching their heads, but in a way that provokes bowel-shaking laughs, albeit very nervous ones. Performance art, satirical character comedy, man having a breakdown – possibly all of them are happening at once in this half-filled room of Cowgatehead.

It is President Obonjo that greets the audience as they arrive, dressed in the full Idi Amin. If that isn’t unsettling enough, he orders to the stage his “white butler” (Tom Mayhew), a timid, undernourished boy of 23, who can’t maintain eye contact, isn’t dressed as a butler, and who proceeds to give five minutes of hilarious and hopefully intentionally anxious jokes, before introducing his overlord.

Our leader Obonjo is a formidable man with a rock-shattering voice. He begins by issuing diktats, eyeing up potential wives, and threatening to have people shot. A young black man arrives at the door. “My son!” he exclaims. The man appears to be among a group of latecomers, but again, it could be part of the show.

Then, just as we think we have the measure of the man, he asks everyone, “Have you seen Benjamin Bello?” No-one knows who he is; they haven’t read the flyers, they’ve just been marched in here by an aggressive African warlord. Bello is the real man beneath the uniform, and as he strips out of it, it’s clear he needs help. “Even my wife thinks I’m Mr President!” He’s simultaneously pleased and envious that the President gets attention. He’s soon back in uniform.

At one point, he steps into the audience to hector them loudly with questions about his leadership. “Yes, sir!” each member of the audience replies abruptly, until he tones the aggression down, ‘Why are you calling me “sir”?’ That’s right – why are we calling him “sir”? Who the hell is this? Why are we laughing so hard?