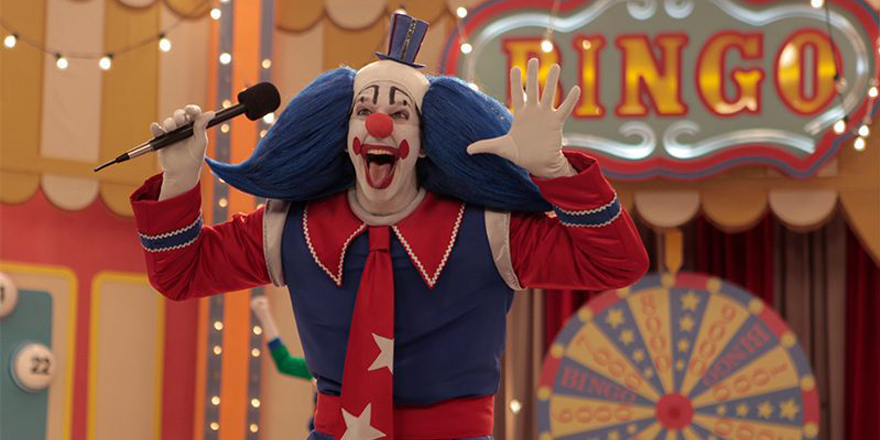 Bingo: The King of the Mornings

Outdated tragicomic biopic on the price of fame in Brazilian TV.

Bingo: the King of The Mornings marks Daniel Rezende’s film direction debut, after a long career as a film editor for Fernando Meirelles’ s City of God (2002) and Terrence Malick’s Tree of Life (2011).

The film successfully borrows the sugar-pop aesthetic from the universe of 80’s television, nailing the soapy tacky quality of the period. Later, when Augusto’s impulses have started to catch up with him, the colour palette darkens which, if the viewer decides, make sense to the drama.

The beginning of the film introduces an interesting account of how Barreto has to twist the American clown to fit in with Brazilian culture. But unfortunately, the viewer is hardly convinced by the supposedly brilliant, eccentric and irreverent improvised humour, which appears instead rather arrogant and shallow. Vladimir Brichta’s performance is energetic but overacted at times (as when he falls into despair punching the TV), and the use of slow motions for dramatic moments is, ironically, more laughable than emotional (as when Bingo’s clown nose filled with cocaine starts bleeding).

“Bingo” claims to be a drama about “the man behind the mask”. Even though it is such, it does not avoid the cliches of the genre and the mise-en-scene comes as no surprise. The character’s self-destruction in the second half of the film goes in cycles, and the close-up shots of his incessant use of alcohol, cocaine and women are repetitive. Likewise, the sequences involving the sad son, distanced from a father who has let him down once again, are regularly pushed.

Overall, we follow Augusto/Bingo’s own personal decay with a distance and no conviction of his artistic value. “Bingo” appears like an old fashion film with a strange sort of epiphany at the end. Whether something is lost in translation or not, the lack of psychological depth and the too obvious anticipation of the storyline makes it difficult to engage in this laborious drama.