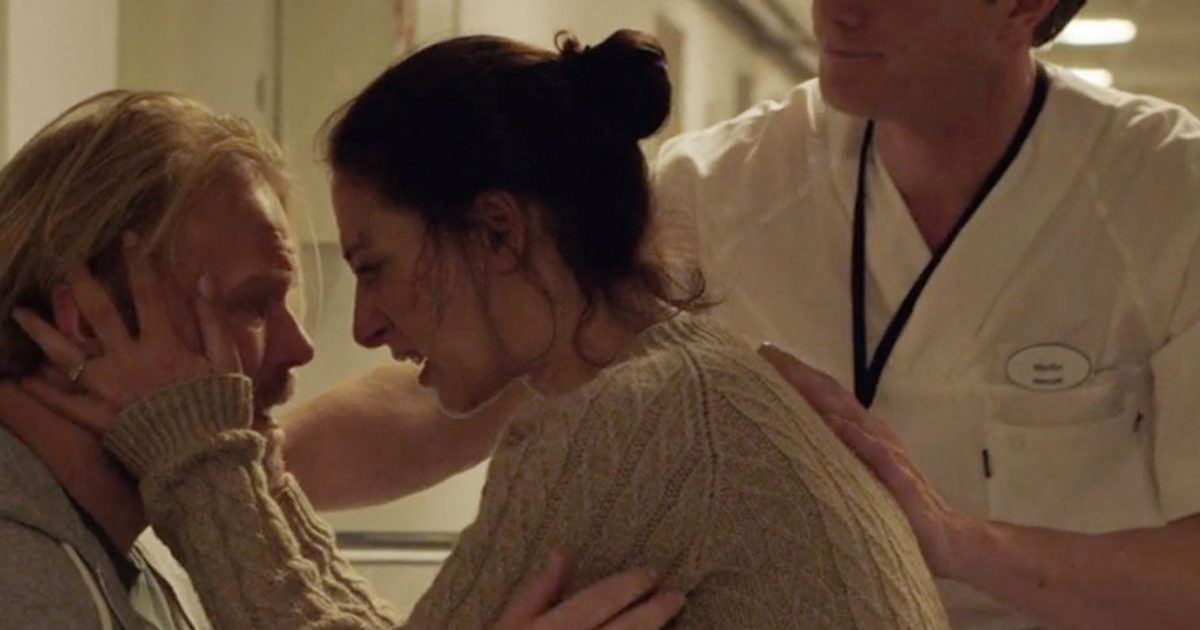 A family tragedy and its devastating impact is the focus point for Blind Spot, a gruelling though competent drama from Norway with the unusual distinction of being filmed in one uninterrupted single take.

When Tea (Nora Mathea Oien) walks home with her friend from gym practice, her arrival could not be more normal as she greets her mother Maria (Pia Tjelta) and her younger brother. She writes in her diary, but leaves a message for her father before disappearing out of frame. As her mother calls her name, there is no answer and worryingly, the silence continues. To her horror, she discovers that Tea has deliberately jumped from the balcony.

Once ambulance crews urgently get her to the hospital, her father Anders (Anders Baasmo Christiansen) arrives shortly after, but as time progresses, the realities slowly set in and further discoveries reveal the grim nature of why such an event would occur.

The director, actress Tuva Novotny, has clearly taken on a highly ambitious undertaking for a directorial debut, yet one that succeeds thanks to its often intense real-time structure. It brings to mind the 2015 German thriller Victoria, more impressive when you are reminded that this is a first-time director with a confidence suggesting she has done this several times before.

Authenticity is crucial and everyone, from the increasingly distressed mother and the temperamental father to the caring ambulance crews and head nurse Martin (Oddgeir Thune), all disappears into their respective roles as the feeling of touch-and-go kicks in.

In particular, Tjelta delivers a moving portrayal of a mother torn apart by understandable grief, whose horror gradually builds as she learns more about her daughter’s situation. The film is harrowing to watch thanks to its sense of conviction, yet Tjelta’s performance remains compulsive from the moment she urgently runs down the block of stairs to Tea, a journey which obviously takes seconds, but which feels like a never-ending torture. It is made more poignant as a result of the final scene representing the cycle of uncertainty, the culmination of a possible career-defining performance.

Though Tjelta is stellar, that does not cause other cast members to be outshone. Christiansen is equally moving as the father, whose initially unlikeable presence is quickly replaced with genuine sympathy as the heartbreak of the situation threatens his own health. As the nurse Martin, Thune is the guiding light in a horrific situation, bringing a genuine warmth that is particularly noticeable when attempting to keep both Maria and Anders composed.

The ability to create unease is apparent early on, when Tea and her friend walk home with the lingering fear that something distressing might happen, not knowing when or how. When the incident does happen out of shot, it doesn’t surprise that such a grim event has occurred, but its shock value is clear.

The film does appear to drag slightly in its third act, mainly because its one-take structure does not allow it to do anything much outside of dialogue between the parents and medical personnel. The sense of ambiguity in the end can play as somewhat frustrating, given how much consideration has been invested in the characters and the demand to know what happens next. But though imperfect, Blind Spot is a confident debut detailing a heart-breaking event with a combination of virtuoso technical direction and assured performances.