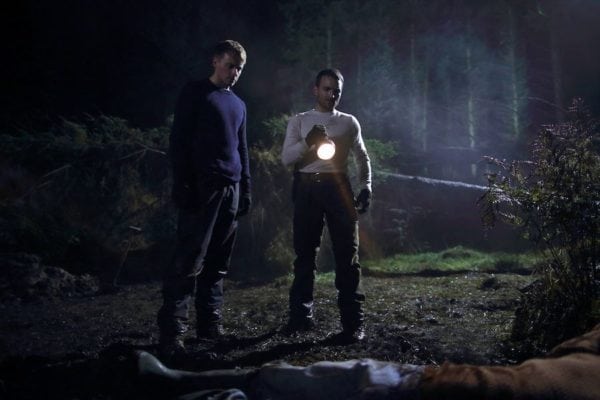 Calibre opens with a breath taking shot of the Scottish Highlands and a blast of ominous music, almost as if the landscape itself already knows the horror set to unfold within it. The scene snaps to Edinburgh, where Vaughn (Jack Lowden) is leaving his pregnant fiancé for the weekend to go hunting with old school pal Marcus (Martin McCann).

Knowing that this film is a thriller, it is clear that this pleasant preamble – catching up with friends, having a few pints and looking forward to a new baby – is set up to crash and burn. Even though nothing bad is happening quite yet, the laughter and the drunken dancing still breathes tension because we are waiting for the disaster.

When it finally occurs, the characters and the audience lurch from one terror to the next. This is yet another film, like Fargo and like Detroit, that shows just how bad the combination of men and guns can be. I say men rather than people because in Calibre especially it is men and only men who are involved in the chaos. The women in the film take the parts of the mother-to-be waiting at home, a one-night stand and a nice but ineffectual local girl. So that’s the maternal one, the sexy one and the passive sideliner: a tick in the box for three flat stereotypes.

But perhaps director Matt Palmer is purposefully throwing the focus on to masculinity because outside of fictional films, men are also the locus of gun violence. Perhaps this is a critique of the pressure to conform to the model of a manly man: “Just do it,” Marcus whispers to Vaughn, urging him to kill a deer he clearly doesn’t want to shoot. Or perhaps it is just another unconscious reinforcement of binary gender roles – you decide.

In spite of this, Calibre does what a good thriller should do: it keeps you in a constant state of blissful terror right up to the final climax.  As one cinema-goer comments, “you watch it with your whole body”: mouth open, eyes wide and a pre-emptive hand ready to shield you from whatever comes next.