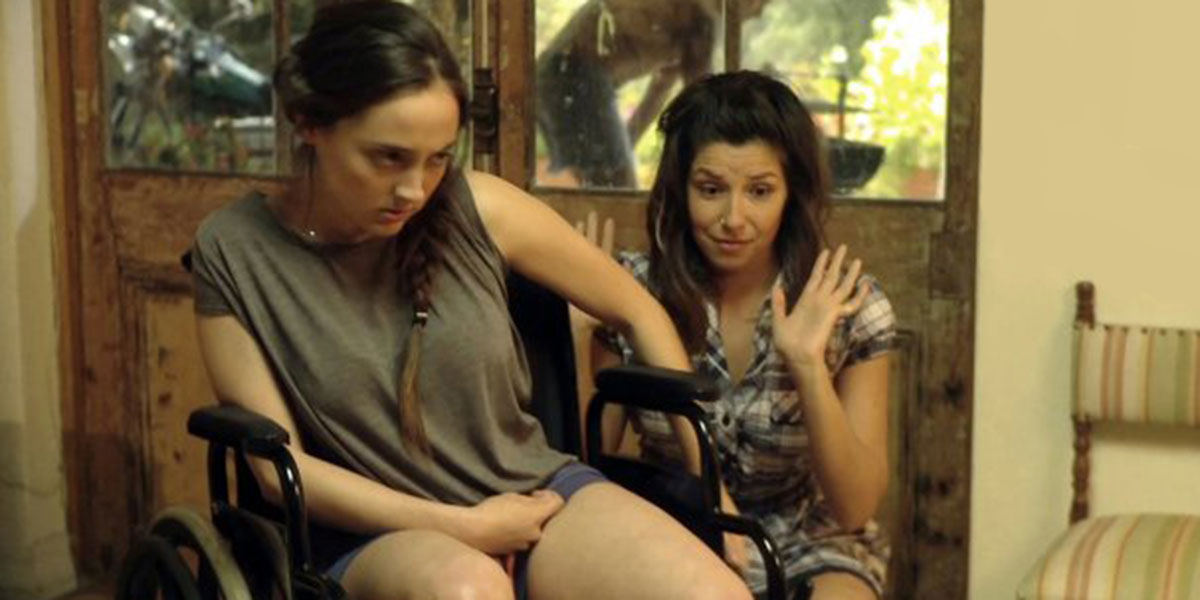 When popular teenager Camila (Francisca Walker) suffers a stroke whilst swimming at a party, her whole life is put on hold. Once looking forward to attending university in the US and socialising with her friends, she now no longer wants to leave her house. However, when Camila’s carer Berta (Dayana Amigo) and her boyfriend Luis (Koke Santa Ana) come to look after her whilst her parents are away, Camila finds herself increasingly attracted to Luis, and together the two of them begin a relationship seemingly without Berta’s knowledge.

Director Jimenez-Gili, who co-wrote the script with Pamela Chovan and Gonzala Gorigoitia Abbott, begins strongly, with Camila’s stroke and her initial recovery period covered in an effective manner. In particular, the opening scene showing Camila socialising with her friends and suffering the stroke whilst swimming manages to set up what she loses as a result of her stroke without overly signposting what is going to happen to her. The following scenes where Camila is convalescing in hospital and is unable to adjust to life at home are also strong, with her unwillingness to eat, refusal to acknowledge her old friends and the clashes with her parents conveying the physical and mental difficulties of recovering from a brain injury.

However, the introduction of Berta and Luis take the narrative in an unnecessary and somewhat problematic direction, which isn’t helped by Berta’s seemingly negligent treatment of her patient, including letting Camila fall to the floor during an argument. The remainder of the film is taken up with Camila and Luis’s growing attraction to each other, which continues alongside the fracturing of the latter’s relationship with Berta.

Not only are the difficulties Camila faces largely sidelined, with her physical and mental progress abbreviated to the point of implausibility, but her relationship with Luis brings up a range of ethically troubling issues that are never properly addressed. Their first scene alone together begins with Luis admitting to watching Camila skinny-dipping in the family pool without her knowledge, and progresses to them having sex fairly quickly, with little reservations from either side.

Berta’s feelings are not really taken into consideration by either Camila or Luis, with the exception of a conversation following their having sex, and the conclusion raises further questions rather than resolving Camila’s character arc. Whilst the overly short running time may be a contributing factor towards the compression of this character development, poor writing from Jimenez-Gili, Chovan and Abbott appears to be the central reason why the relationship doesn’t work.

The performances mostly succeed in rising above the material, with Walker in particular impressively depicting Camila’s slurred speech and limited mobility as well as her anger and frustration at her disabilities. In addition, Walker and Santa Ana share impressive chemistry despite the questionable nature of their relationship and Amigo also gives a spirited performance as Berta, effectively bouncing off Walker and Santa Ana in their often-antagonistic exchanges.

However, strong performances can’t prevent Camila’s Awakening from feeling somewhat misguided, with the focus placed on justifying an arguably inappropriate relationship rather than on the struggles facing a young stroke survivor.