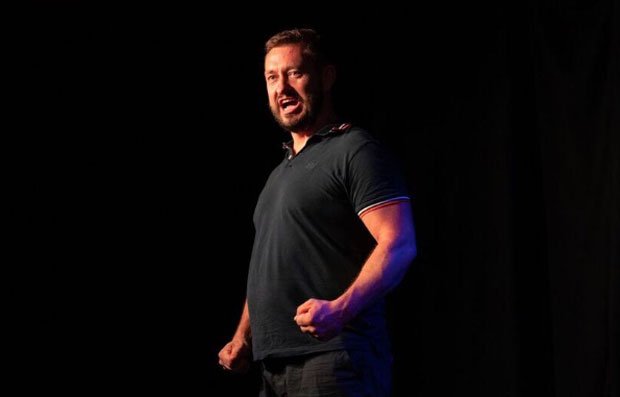 This one-man show concerns the fracturing relationship between successful children’s author David and his American partner Tom as they try to deal with the private and public fallout resulting from the deaths of two of their children in a canoe accident. Matthew Roberts, who both wrote and performs in the play, effectively uses the inciting incident to encompass a multitude of issues.

These range from media outrage, which in the 21st century now includes hateful comments on Twitter aimed at the couple, to the appearance of their older adopted son Andrew, who arrives before the funeral with his own child. In addition, the accident has resulted in a growing conflict between David and Tom, with David being unable to accept the deaths of the couple’s children due to his guilt of having sent them on the adventure holiday in the first place.

Roberts adeptly represents the above issues in a manner that is naturalistic, with the homophobic coverage of the incident and David’s conflicted feelings displayed in his angry rants at Tom, which also work in references to classic children’s literature, in particular the Eugene Field poem Wynken, Blynken and Nod, which becomes a recurring motif throughout the play. These references not only tie in to David’s occupation, but also reflect the memories he has of his relationships with the children, a perfect family unit now tragically torn apart. The only weak element is the segment involving Andrew, who was adopted by the couple as a teenager – his backstory about growing up in care in Liverpool feels separate from the main narrative and themes and as a result comes across as out of place in comparison.

As the only performer onstage, Roberts does an excellent job in portraying David, Tom and Andrew, particularly when switching between the emotional Yorkshire-accented David and the calmer American Tom during the often intense arguments between the two. His dedicated performance and layered script help to breathe life into this devastating look at how an accident affects a couple.