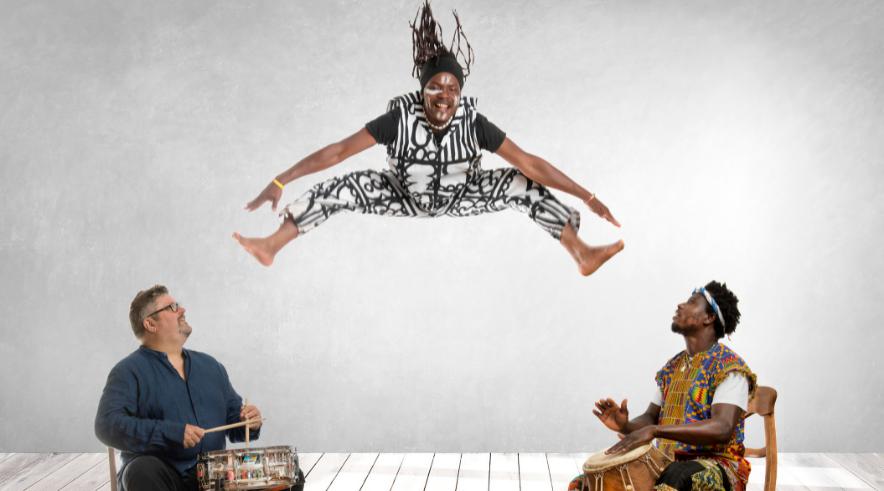 a joyous showcase of music, dance and song

Celebrating Okoe is being performed against the impressive backdrop of Edinburgh Castle in new Fringe space Multi-Story, which has been created collaboratively by Gilded Balloon, ZOO, Traverse Theatre & Dance Base. Featuring an open-air performance stage, local street food stalls and bars, the audience is advised to dress accordingly, as the seats in the auditorium, in bubbles of 2 and 4, are all exposed to whatever the Scottish weather brings.

Celebrating Okoe is a tribute to the great, late Ghanaian drum master, Okoe Ardyfio, who died in 2021. Like the brightly decorated space that is Multistory, this show is a joyous showcase of music, dance, and song by 14-piece African Groove Machine honouring Ardyfio.

Performing together for the first time together since coming out of the pandemic, some of the music played by African Groove Machine was composed for Ardyfio to play with Tom Bancroft, Thomas Annang, Adie Baako-Elias, and the Edinburgh School Jazz Orchestra in the Edinburgh Jazz Festival in 2019 – Ardyfio came over to Scotland but was too ill to perform. Okoe trained Thomas Annang to be a master drummer and Adie Baako-Elias to be the lead dancer of his group Akrowa.

Many years later Okoe also met Scottish jazz drummer and composer Tom Bancroft when he visited Kokrobite to study Ghanaian drumming. The very first thing Okoe said to him when he discovered Tom was from Scotland was, “Do you know Shooglenifty?” – a band Tom had played with and knew well because Okoe had performed with them for Prince Charles during the Commonwealth Games in 1986. This meeting resulted in Tom going back with his family for 6 weeks to study with Okoe in 2012, and then Okoe and Akrowa coming to Scotland and teaching thousands of Scottish children Ghanaian drumming and dance.

In a limited run, this special version created for Fringe 2021 celebrates international collaboration, music, dance, and song coming out of the pandemic and celebrates Ardyfio’s life and music. It combines Ghanaian rhythms with Scottish Jazz spirit, Afrobeat vibes, singing, funky horns, jazz improvisation, and dancing for an explosion of Kpanlogo grooves.

If Love Is On Your Mind, the penultimate song, featuring the voice of Leith soul diva, Subie Coleman, and accompanied by the band, is a memorable toe-tapping earworm. Bancroft informs us it can be downloaded for £1.99, with all income to be donated to the fundraiser for Okoe Ardyfio’s family and group – which is a small price to pay for this man’s legacy to live on.

Even a few sound issues, and Scotland’s inclement weather (a brief downpour right in the middle, and high winds causing havoc to the musicians’ sheet music, then bright skies minutes later), couldn’t dampen the vitality of this show or the audience’s enjoyment in the final piece to get out of our chairs, get our African Dance Grooves on and to join in the moves and the spirit of this Fringe performance.