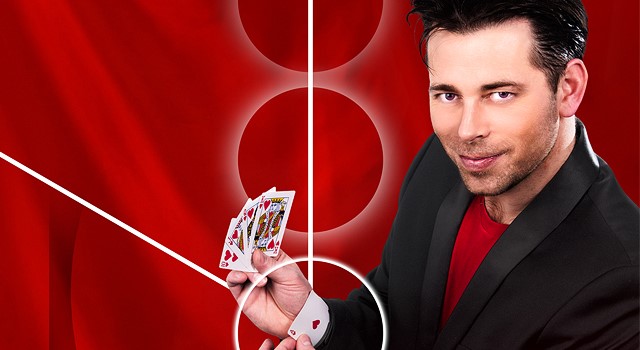 [rating:3/5] Feels like a night in Vegas without the next day regret utilising many props you expect in a magic show, but in a unique way that isn't expected.

Chris Dugdale returns to the Edinburgh Festival Fringe for his forth run with Sleightly Dishonest, blending magic and a bit of comedy to create a very entertaining show. It starts as if the show has already happened as Dugdale asks for people’s names from the audience and the outcome of some of the tricks. The format is clever in retrospect but slightly confusing while watching.

The magic is very good with tricks ranging from cards to razors to number games that are more impressive than your average magic show. The use of a camera to catch a close-up of the tricks is an excellent addition especially in an auditorium where people in the back wouldn’t be able to see the action otherwise. Dugdale’s show feels like a night in Vegas without the next day regret utilising many props you expect in a magic show, but in a unique way that isn’t expected.

While this isn’t a comedy show, the jokes lean a bit on the dad side and only get a few chuckles. One of the funniest things in the show is Dugdale’s glamourous male assistant dressed in a pink tutu. He should definitely have more stage time. Enthralling on stage, Dugdale shows he’s an experienced performer, however the show gets a bit too cheesy vegas at times with the jokes and flair. His presentation and choice of tricks are spot on creating a show that leaves everyone wondering, how did he do that?