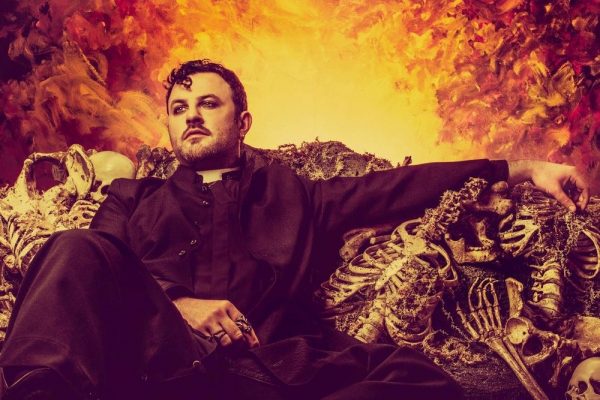 Riotous character comedy is an hour of ecclesiastical excellence

Fresh from his Best Newcomer award at last year’s festival, Ciarán Dowd returns with the further adventures of the legendary swordsman (in both senses of the word) Don Rodolfo Martini Toyota.  Adventurer.  Lover.  Fighter.  Gobshite.  But it appears our priapic anti-hero with the Andalusia-via-Drogheda accent has turned over a new leaf.  He’s found God and is now Padre Rodolfo, who dispenses salvation instead of seduction.  His old sins are not easily forgotten however, and old habits die hard in a blisteringly rapid hour of high-energy silliness.

For a returning character and a continuation of an existing narrative, Padre Rodolfo cleverly functions perfectly well on its own terms.  Familiarity with the earlier show isn’t necessary such is Dowd’s bombastic skill in establishing the character.  A brief recap weaved into a tale of how Rodolfo found his faith is more than enough.  This is good news to all those who missed out last year.

This self-proclaimed, ‘Jack of all trades, master of nuns,’ hasn’t been tamed by his priestly duties.  Dowd plays Rodolfo with barely-contained lunacy that gives an unnerving edge to Rodolfo’s Munchausen-Esque tall tales.  With liberal profanities and a fondness for graphic sexual imagery, this irreverent reverend is very much in the Rabelais and Laurence Sterne mould of clergymen.  Throw in a fight with the Devil, a sexy nun, a talking owl and communion wafers hurled like plectrums at a rock concert and we can be sure this sermon is far from holy.

Rodolfo’s tale itself is a relentless mish-mash of cultural references.  There’s Princess Bride there, obviously, with a dash of Zorro and some Musketerial elan.  With its possession motif, there are nods to The Exorcist and there’s more than a smattering of the work of Mel Brooks at his most scatological.  It may lack the kamikaze boldness of something like Natalie Palamides‘ Nate last year, but it’s infused with the joy of storytelling as well as laughter.  Dowd is happy to throw everything at the wall to see what sticks, grotesquely so when Rodolfo gets round to the subject of celibacy.  That the hit rate of really excellent jokes is so high is hugely impressive.  He even chucks in a few deliberate clunkers for the delight of a synchronised groan from the full room.  Make no mistake, he’s loving every second and it’s infectious.

The underlying theme of the show, if such a shaggy dog slice of uproarious absurdity could be said to contain one, is whether a person can really change.  Hopefully, Ciarán Dowd will be happy to remain in his current status quo, as there is plenty more mileage in the character of Rodolfo.  Perhaps his Quixotic creation can continue to tilt at windmills in other guises, like a self-regarding, foul-mouthed Mr Benn.  In his current guise though, Padre Rodolfo is full-throttle, theatrical character comedy of a very high standard.