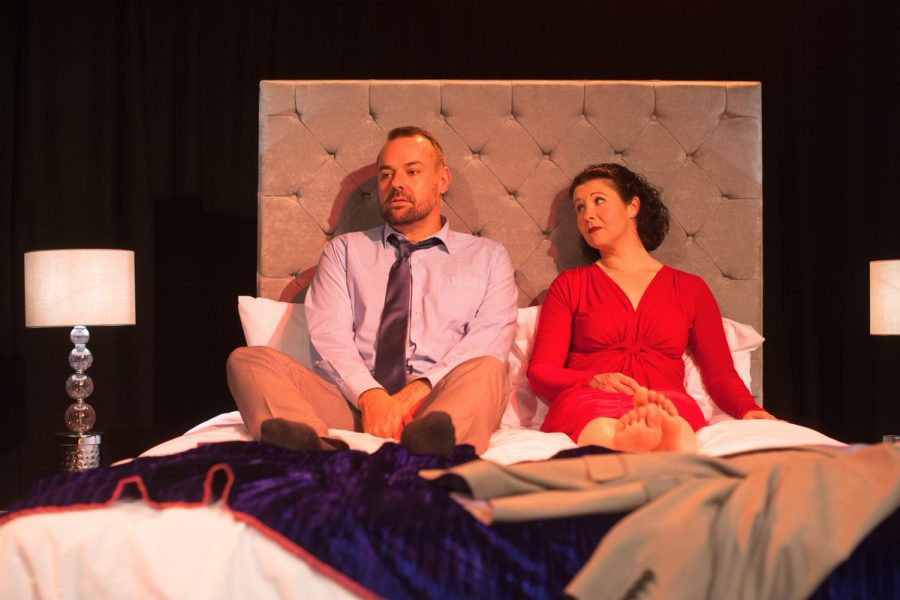 The Course of True Love

Romantic and international relations dilemmas play out in a plush hotel room.

Its origin as one of the short format A Play, A Pie and A Pint series means Fire Exit’s The Course of True Love is over a little quickly for a Friday night out, but despite the short duration, David Leddy‘s play packs in two interesting and well conceived story threads – a romantic dilemma and an international relations one – that ensure the audience don’t leave feeling short changed.

Celia (Irene Allan) and Oliver (Mark Jeary) run an aid charity on the brink of sealing a breakthrough deal with an unnamed country’s shady President. After an intimate dinner with the Pres and his trophy wife, they’ve retreated to their hotel room to consider their options. Inevitably, the deal is riddled with compromise – the champagne being lavishing on them has definite strings attached – and the future of the charity is at stake. But that’s just the macro-crisis. Each has their own personal micro-crisis which surfaces in this moment of high emotion. Celia’s commitment to her charity has already cost her a marriage and a relationship with her daughter, while Oliver’s commitment to his boss has cost him his partner too. Thus the penthouse suite becomes the stage upon which the pair must come to some decisions, both personal and professional.

The relationship – between female and gay male confidante – feels instantly recognisable, and yet still fresh and fascinating, overlaid as it is with a boss/employee dynamic, and the pair’s personal doubts. The set-up is rich in tensions and thus ripe for exploration. Celia might be a successful CEO, but she is racked with self-doubt and suffering from impostor syndrome. Up against a tyrannical dictator she feels well out of her depth. Oliver, on the other hand, might be an underling, but he’s a valued and suspiciously loyal one, whose motives might not be entirely work-related.

Allan and Jeary are a good pair for this, neither being a straightforward, stereotypical fit for their role. Their dialogue has a pleasing, natural quality to it. As they kick off their shoes to lie on the bed to chat, it actually feels like listening in on a workmates’ post-conference conversation, to the point when, for a moment, it gets a tad dull. On the whole though, the eavesdropping lends the reveals an added piquancy. It’s like finding out office gossip about your boss.

As for the parallel international relations strand, the jeopardy surrounding the aid deal is not quite as powerful as is made out. Sure, Mr President’s overtures might be irresistible and the consequences of not accepting disastrous for the charity, but the pair act out of fear for their lives. Even evil despots don’t bump off charity CEOs in international hotels. Celia could easily quit the job and return home to the quiet life if she can’t take the heat.

Nonetheless, The Course of True Love ends up a satisfying and relatively complex short play that’s well worth an hour’s investment of viewing.