David Grieg’s adaptation of this Strindberg classic offers a strong, cerebral and yet still entertaining performance.

Written by a Swede (August Strindberg) in Denmark in 1893, Creditors has had a colourful 125-year history, translated into several different languages. More recently it has been made into a UK-produced film in 2014, and has now been adapted for modern audiences by The Lyceum‘s artistic director David Greig. It should also be noted that this is director Stewart Laing’s second go at tackling Strindberg’s meditative look at a crumbling marriage. Husband and wife Adolph and Tekla are turned against one another by the manipulative Gustav, Tekla’s ex-husband. The performances are strong if patchy, the source material allowing for passionate line-delivery and playful comedy, yet let down by the casting of Stuart McQuarrie as the Machiavellian Gustav. His creepy intelligence and self-assuredness is undercut by his lack of physicality and at least three unforgivable instances of tripping over his lines. Edward Franklin’s Adolph, meanwhile, is all nervous energy, and his performance builds as a show-stealing Adura Onashile appears in the second half as Tekla.

This latest update leaves the historical and geographical setting vague. The dialogue, too, is not indicative of a specific era – too easily understood to be the original 19th-century language, yet too formal to be considered ‘modern’. The character names and surrealist staging, evocative of the German silent film, The Cabinet of Dr. Caligari, are the only indication of the play’s Nordic roots.

Added into the mix are four original ‘dance’ sequences involving four occasionally out-of-sync Girl Guides. Backed by alarmingly modern music, these scenes are half-atmospheric, half-confusing, highlighting Tekla’s tragic plight, and obviously pander to those who think the #MeToo movement has not been pushed enough in recent months.

The biggest staging risk comes when the action moves inside the wonky shack that sits at the back of the stage. Depending on your seat, audience members are granted a partial view through the window, however the lights dim and a screen shows a lengthy indoor scene in moody black-and-white, all filmed live. The actors take to the change well, and despite the distracting appearance of the camerawoman, the experiment pays off massively. In all, it’s a strong, cerebral, yet entertaining adaptation with a hit-and-miss record when it comes to taking risks and deviating from the source material. 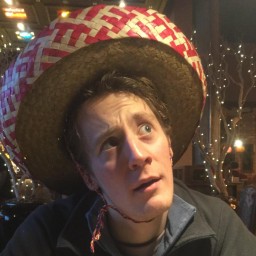 A slick, funny, and enlightening show about the wonders – and horrors – of pioneering technology