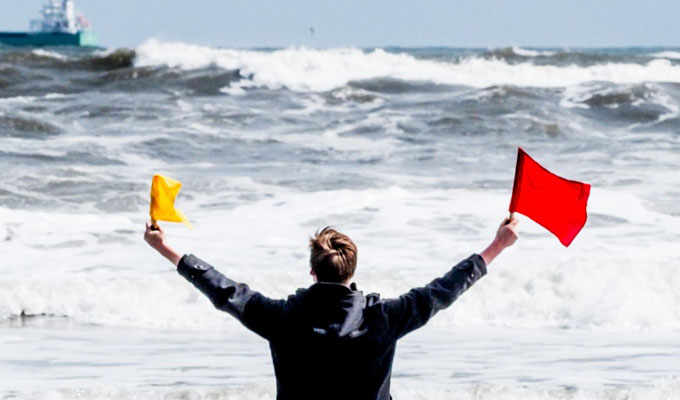 When you’re in a room with David Callaghan, you know about it. He’s very tall and he’s very voluble. He’s also a more than decent comedian, so while he might look and rant like Owen Jones, he’s much jollier company. For someone who can dominate the room like he can, he has a vulnerability about him, almost as if his frantic chatter is all that’s keeping him from the abyss. Ultimately, it’s that vulnerability that comes to the fore in a set about being a non-man’s man who’s in no-man’s land with his life.

Callaghan is scared of the dark and of crowds, which are the first of his vulnerabilities you should know. The central thread in this piece involves an incident on a busy train journey when the lights failed. He theatrically plays with lights on the stage at various points, to no comedic and seemingly little narrative effect, but it does add atmosphere.

He’s also not one for macho pursuits. The other key story is how he came to be befriending two old ladies at the UK Bridge Championships instead of fully participating in his mate’s stag do. This is a sweet and very believable strand of the show. The mental image of Callaghan at a tea dance while his mates ladsladslads it up at a nightclub springs readily to mind.

For every gag that strikes as he tells these stories, another drifts tamely away, but such is the force and speed of Callaghan’s delivery that you barely register the misses. A very contrived but brilliant Simon and Garfunkel pun deserves the high five he demands from the audience; it’s not the only high five he goes for and gets either. It’s done with an endearing faux-arrogance.

A section on the caterpillar cakes to be found in the nation’s supermarkets has been meticulously prepared and is vociferously delivered. The over-thinking attention to minor details is a winning combination of Disgusted of Tunbridge Wells outrage and beta male geekiness.

But it’s the train journey story that proves to be the bedrock of the piece. Callaghan is not OK. He’s turned 30 and he’s not OK, and the moment on the train made him realise that. As sad bits go, it’s not the most powerful theme – general directionlessness – but he plays it super seriously, going full on dramatic monologue. For a second, the thought occurs that maybe there’s a twist coming, but it doesn’t materialise. He just does feel like he’s wasted his life and wants passionately to get that out there.

The imagined funeral he holds for himself (with recorded eulogy read by his priest) is therefore a better note to end on. It’s been an up-and-down set in terms of laughs, but you’ve always been rooting for him. You begin to understand why the old ladies at the bridge competition took him under their wing.