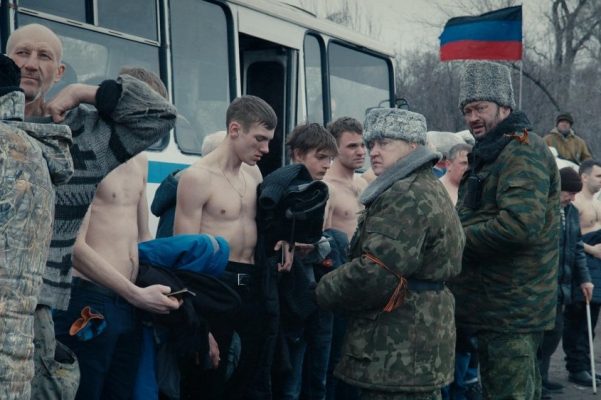 Thriving amidst the shattered chaos of Eastern Ukraine and Russia, Ukrainian director Sergei Loznitsa’s newest cinematic release continues his obsession into the social breakdown of the violent suppression. Shot as a documentary styled black-comedy, Donbass was selected open the Un Certain Regard of the 2018 Cannes film festival.

The region of Donbass exists in two states of thinking regarding the Russian supported Donetsk People’s Republic. A struggle exists in the complex reverence for the aggressive saviour from fascism during the Second World War, yet at the same time, there is a worry of pro-Russian separatists. Particularly for an audience unfamiliar with the political climate of Eastern Ukraine, Loznitsa manages to compose enough detail while maintaining audience interest in an ongoing, if underreported conflict.

Despite misconceptions as a semi-documentary, Donbass is not entirely set around political commentary. Marketed as a black comedy it leans heavier into the grim than that of levity. Comedy is found more in surrealness in how lies are truth and hatred is everyday life. It is a mesmerizing piece not only on politics or war but on the children of these two; propaganda and post-truth environment. War is a utility for violence but also an excuse for the blanket abuse of the working class. Echoing a post-truth age, we have zero effort in envisioning all but one scene as taken directly from headlines. Depending on the scenario we move from handheld to documentary filmmaking. Oleg Mutu’s cinematography is crafted, not as propaganda, but similar in techniques to highlight the issue and make it digestible for the audience.

Truth is a scarce resource. A notion Loznitsa strikes home in the opening shot, a deliberately assembled handheld shaky cam. We follow the actors through a single shot scene until reaching the news team. Donbass starts not with a crash of violence but with a make-up trailer. Actors preparing for an unknown shoot.  The arrival of armed enforcements confirms the nature of these performers. Hurried to the scene of a bombing, the now grieving neighbours perpetuate the essence of ‘fake news’ as they sell their paid story.

Of the many themes shared across the film, the primary is that of us/them. This leads to the most gut-churning realisation in how accessible the film is. How clear we find it to understand the rot of a nation. A particularly uncomfortable scene is exquisitely performed as a young man attempts to reclaim his stolen car, only for his cries for help to be met with strongarm manipulation to ‘donate’ his vehicle for ‘us,’ failure to do so a sign of his siding with ‘them.’

Loznitsa continues his trait from A Gentle Creature of capturing the microscopic details of anguish in a person’s face, though this ability is lost in one sequence. In a film in which war is a central catalyst, the loudness can overblow the pathos – losing out on quieter moments to allow significance to settle.  Mutu’s cinematography allows perfectly acceptable shots to uncomfortably linger. Nowhere is this more evident than with the exertion of effort to maintain interest during a wedding. It’s the weakest portion of the film, realism stretched outside the confines of belief, something which despite the sensationalism of the movie so far hasn’t been broken.

Shot in an engrossing manner, Donbass is formed with a scatter effect of hard-hitting sequences. Of the various vignettes, only a couple fail to hit their mark. Loznitsa’s depictions of shame beatings, bomb shelters and assassinations stand as dark reminders against exaggerated comedic reality. Uniting the two concepts well, Donbass finds itself as a deeply engrossing film, where fury and despair sit alongside absurdist humour.