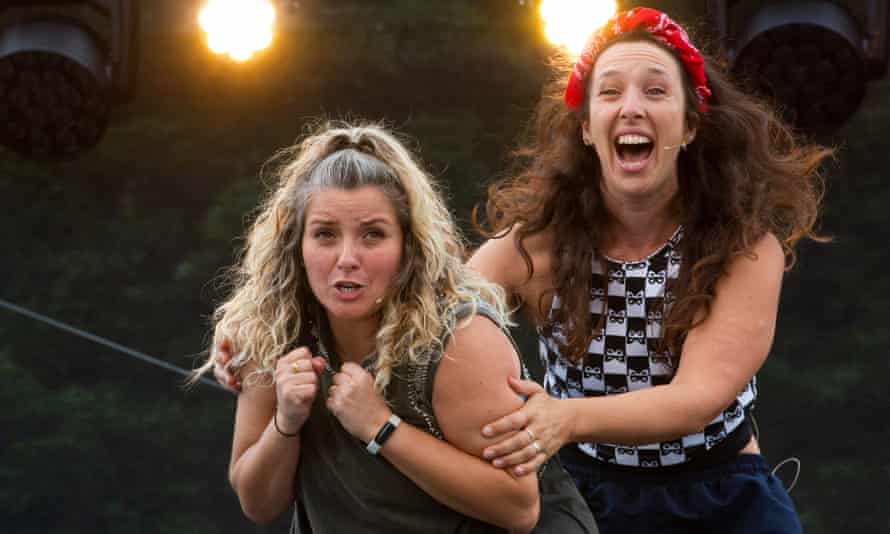 Affectionate and nostalgic, Double Drop blends rave culture and Welsh druids in a way you wouldn't expect to be possible

This lively play from Dirty Protest Theatre is, in two very different ways, about transcendence and finding your place in the world. Double Drop is an acidic dive into belonging and growing up. In the early stages the story can seem a little disorientating, but once the flow settles in you are rewarded with a story that balances a specific time and place with the universal need to be part of something bigger than yourself.

Esmi loves nothing more than illegal raving in the mid-90s with her best friends and losing herself in this modern, pulsating trend. A gifted Welsh-language singer, she is also in line to become an honorary druid – much to her mother’s delight. It all comes to a head at the National Eisteddfod, which itself happens to include a rave.

You admittedly spend a lot of the show waiting for the first hint of a Prodigy song, but there is far more to Double Drop than a banging soundtrack. It is a nuanced, entertaining look at how opposing opposites aren’t actually as opposing as your rebellious teenage way of thinking might admit. The emotional crescendo of Double Drop rests on the especially satisfying realisation that different parts of your life don’t necessarily have to be at loggerheads.

The rave setting, while almost impossible to capture in its full intensity, is vividly brought to life through raw emotion, physicality and descriptive dialogue. North Wales, meanwhile, feels closer than you might like given how you just might have to sit through the show amidst a torrential downpour (this is outdoor theatre after all). The setting is worthy of a trippy throwback to misspent years of youth, even if this is a show that would reach an incredible new level with more scale and presence. And the on-stage double act are fantastic, diving between the buzzing highs and grimly down-to-earth lows without dropping a beat.

Affecting, fast and toying with a feeling most of us have had at some point in our lives, Double Drop is a touching reminder of what it is like to feel lost in a world with more than one open door.