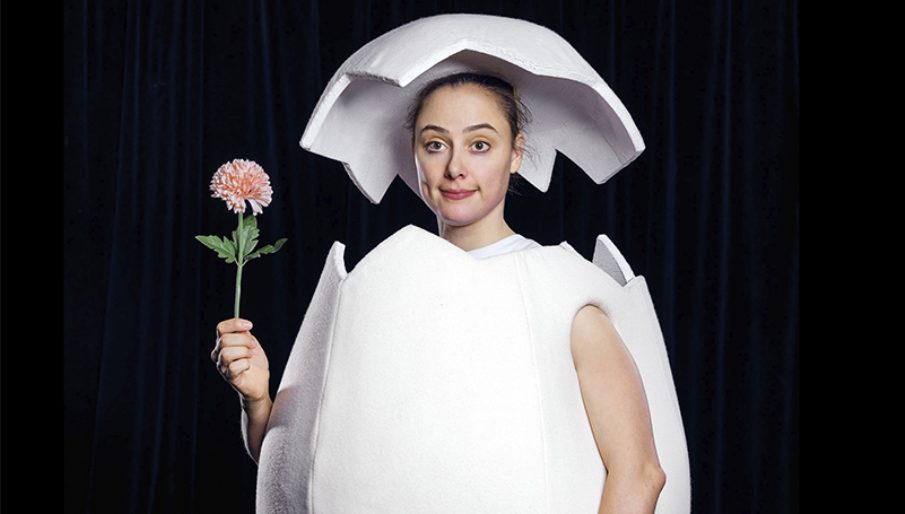 Pregnancy, motherhood and 80s hits all make an appearance in this dynamic solo show

Erin Fowler had big plans for 2020, she tells us at the beginning of her one-woman show EGG. Taking inspiration from the steamy (and foggy) Scottish series Outlander, she was going to move to Edinburgh, meet her husband, and start a family in the glorious Lowlands.

Of course, we all know what happened next.

Instead of living her best life in Auld Reekie, Fowler realises that she has to restructure her aspirations of motherhood around a pandemic – and, on top of that, the clock is rapidly ticking down (“remember, eggs do go bad”, a disembodied synthesized voice reminds her). Here, Fowler successfully twists the mundane – such as scrolling through Tinder – into the humorous, through the use of facial expressions and well-timed 80s ballads.

Alongside the laughs, however, Fowler raises more serious points about her inner turmoil – all of which have undoubtedly crossed the minds of many potential parents. She ponders the impending climate crisis and the ethics of bringing a child into a world as broken as ours. She frantically googles how much it costs to freeze your eggs, and wonders whether she can make it as a single mother or whether she’ll have to follow the more “traditional” route. And of course, she also worries about her career, and how a baby would fit into that whole picture.

Although Fowler is clearly a very skilled performer, a few of the more whimsical and unpredictable scenes only serve to distract from the crux of the show. She’s so engaging when simply talking or musing aloud that the last long, protracted dance number in particular almost feels like over–egging the pudding compared to the rest of the high-energy hour. Maybe it works better in person, where the experience is more all-encompassing, than through a screen. Overall, however, Fowler has created a poignant and thoughtful piece which neatly encapsulates both her specific anxieties, and the more general stress, that surrounds choosing to have (or indeed, not to have) children.